Arzanon was a male human Sith Inquisitor who served the Sith Empire during the Cold War against the Galactic Republic.

As a Force-sensitive human, Arzanon trained in the ways of the Dark side, rising in the hierarchy. During his years as a Sith, he believed the Sith Academy was inhabited by traitors, individuals, seeking to destroy the Emperor's established law while being alongside the submissive. He, and a female Officer, would go about to capture them in the Valley of the Dark Lords or ask others to do so. He was defeated and killed by a Republic Strike Team on Korriban.

"Defiance of authority is a hallmark of the immature...and the subversive."
―Inquisitor Arzanon[src] 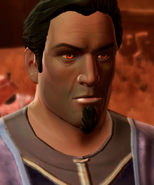 Retrieved from "https://swtor.fandom.com/wiki/Arzanon?oldid=113012"
Community content is available under CC-BY-SA unless otherwise noted.