Edit
watch 01:54
Arcane: League of Legends - The Loop
Do you like this video?
Play Sound 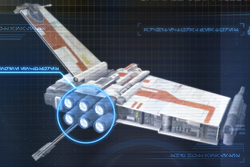 The BT7-Thunderclap is a starship available to players of the Trooper class.

The BT-7 Thunderclap is the Republic's largest and most elite rapid assault ship—streamlined for fast deployment in combat situations. Upgrades requested by Republic Special Forces ensure reliable performance and durability: state-of-the-art armor plating and heavy laser cannons provide exceptional combat capability, modular shield systems protect the Thunderclap from enemy fire, and the ship's design deflects blaster fire away from crucial components in the event of shield failure. Despite its efficient military design, the Thunderclap is outfitted with all manner of interior improvements. The main deck contains a high-tech command center and briefing room, a secure armory, and a fully-outfitted medical bay. Personal bunk space is above average, and recreational facilities are available for increased quality of life for the squad during extended missions.