"The baspoor glider, sometimes called the "sky swimmer" for it's fish-like appearance, is an omnivorous flying amphibian often found on temperate worlds. It's unique physiology allows it to "land" in water, where it can continue to propel itself with its powerful wings. It has very little mobility on solid surfaces, and has difficulty taking flight again should it find itself grounded. The young of the baspoor glider are carried on it's mother's back for the first few months of life and have a highly unusual diet. Children gnaw at the skin of the mother for nourishment while the mother focuses on her own needs-her trivial injuries healing quickly each day."
―In-game Codex (Bestiary)[src]

The Baspoor glider, also called the Sky swimmer, are a race of omnivorous flying amphibian animals native to the planet Belsavis. 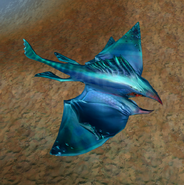 Retrieved from "https://swtor.fandom.com/wiki/Baspoor_glider?oldid=110237"
Community content is available under CC-BY-SA unless otherwise noted.