Bela Kiwiiks is the Togruta Jedi Master of Padawan Kira Carsen as well as a member of the Jedi Council.

She and Master Orgus are sent on separate secret missions while the Jedi Knight character and Kira are assigned to track down a kidnapped Doctor Tarnis on Coruscant. The doctor turns out to be the son of Darth Angral and was working under cover for the Empire to infiltrate the Republic's weapons programs.

During the Tatooine missions, it is revealed that Bela was sent to Tatooine to investigate why one of the Republic's secret weapons labs has stopped communicating with the Republic. It is up to the Jedi Knight character to rescue Bela from Lord Praven and the shock drum super weapon. She had to retreat into herself and allow the force to act as a shield against the weapon in order to survive. 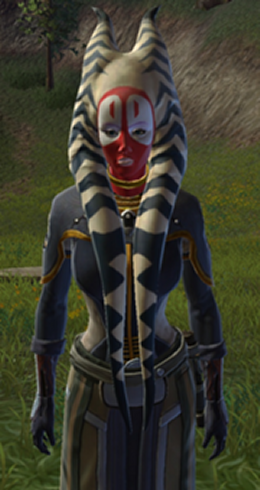 Retrieved from "https://swtor.fandom.com/wiki/Bela_Kiwiiks?oldid=87912"
Community content is available under CC-BY-SA unless otherwise noted.