"Bounty Hunters are well-equipped and relentless trackers, utilizing a wide array of weaponry from blasters to missiles to flamethrowers
Primary Attribute: Aim. Aim increases the damage and critical chances of the Bounty Hunter’s Ranged and Tech powers. This remains so for both the Mercenary and the Powertech Advanced Classes, while the Mercenary’s Aim additionally increases the effectiveness of healing powers
Advanced Classes (Available at level 10): Mercenary and Powertech
Mercenary (Damage, Healing): Mercenaries attack from range with two blasters, using abilities like Unload and Explosive Dart. Mercenaries have the largest arsenal, employing powerful heat-seeking missiles or even healing allies when working as a Bodyguard
Powertech (Damage, Defense): Powertechs leverage the latest technologies, allowing them to draw targets in with a Grapple cord and burn down groups of targets with Flamethrower. Powertechs prefer an up close and personal fight that allows maximum use of everything from flame jets to Retractable Blades, and their massive armor makes them extremely durable defensive fighters when trained as a Shield Tech."
―In-game Codex (Game Rules)[src]

The Bounty hunter class focuses on tracking down and typically, capturing or killing people for credits (whichever pays more or occasionally the said hunter has morals). It is one of the Sith Empire-aligned classes that is not Force-sensitive (but through the legacy system you can have Force sensitive abilities).

"The only law in this galaxy is the one a man makes for himself. The Sith may say otherwise, but even the Empire's reach has limits. That's why they hire Bounty Hunters. If you've earned a death mark, we'll be seeing each other real soon. Don't let it go to your head though. To me, you're just another job."
―Class trailer[src]

Countless enemies stand in the way of the Sith Empire's drive for domination. The empire spares no expense eliminating these threats, offering massive bounties to employ the galaxy’s most lethal hunters. Earning a death mark from the empire means a life spent in fear, constantly looking over one’s shoulder. It's never a question if a Bounty hunter will find you, only when.

Both infamous and anonymous at the same time, Bounty hunters are far more than mercenaries for hire—they're heirs to a professional legacy—an ancient brotherhood with a glorious history. Tracking elusive targets across multiple star systems requires expertise, especially when the targets can be prominent, powerful, and often prepared for confrontation. Thrill seekers from all walks of life set out to become Bounty hunters, but only the most hard-boiled survive in this competitive and deadly business.

The Bounty hunter's path lies along the edge—the stakes are always high—and the path only leads two places, to a life of infamous glory… or to a quick and ignominious death.

Though the Empire disapproves of the Bounty hunters' fierce independence, exceptions are made for those who get results. Few individuals in the galaxy have the gall and the stomach to deliver on the delicate and grim tasks in which Bounty hunters excel. Nonetheless, no one is irreplaceable in the empire, and even the most proficient must repeatedly prove their worth. In the bounty business, one's name is everything, and with each mark a Bounty hunter takes down, his reputation grows, as does his price.

Bounty hunters are far from a homogeneous lot—they come from all races and affiliations and each pursues his quarry in his own unique way. Some Bounty hunters adhere to the rugged Mandalorian code of honor while others answer only to their own moral compass. Some work only on behalf of organizations they agree with, while others have no sense of loyalty.

Despite being kindred spirits, fellow Bounty hunters cannot always be trusted—among the profession’s most notorious members, competition turns colleagues into the most ruthless of enemies. Even the Bounty hunters' employers harbor hidden agendas; the tables are turned quickly when complications arise, and they always do. Shifting allegiances, unbeatable odds, and deadly showdowns are common in the occurrences in the life of a Bounty hunter.

Bounty hunters come and go as they wish across the galaxy, some working alone, others in groups. Though not uncommon for them to pursue targets in the core worlds, the majority of any Bounty Hunter’s work takes place in the Outer Rim where wary and elusive targets often seek places where they can "drop off the radar".

Preparation is the Bounty hunter's best defense, and cutting-edge protective gear is standard equipment for most Bounty Hunters. Artisans spend months and even years hand-crafting the Bounty hunters' heavy armor to ensure it offers superior resistance to all manner of weaponry, and that each suit will still allow maximum flexibility and versatility. Offense is just as critical as defense, however, and powerful weaponry is necessary for any Bounty hunter who might have to shoot his way out of a messy situation. It's not unheard of for a Bounty Hunter to spend as many credits on an advanced blaster as others might spend to purchase an entire starship.

Whether working for credits or principle, the Bounty hunter pursues his targets with dogged determination and methodical precision. Bounty hunters are renowned for their versatility on the battlefield and their ability to go toe-to-toe with Force-users. Their legendary abilities in this arena have earned them the nickname "Jedi killers". However, whoever they must face, the Bounty hunter comes armed with the most-advanced weaponry on the black market, packing heavy firepower but always keeping a variety of tricks and gadgets ready to go.

Always prepared to change tactics on the fly, the Bounty hunter's arsenal includes a powerful twitch-action jetpack, allowing the Bounty hunter to shoot into the air and unleash a hail of blaster-fire.

Bounty hunters are "early adopters" for the most advanced weapons technologies. They have both the credits and the opportunities to experiment with all manner of gadgets. Though almost always handy with blasters, Bounty hunters also keep tricks up their sleeve such as a wrist mounted missile launcher.

No matter how much planning and strategy is done before an assault, close-quarters combat is often unavoidable. Fortunately, Bounty hunters are equipped with the gear to burn anyone or anything that decides to get too close.

"Armored from head to toe and equipped with an arsenal of deadly gadgets, <name> has earned a reputation as the best bounty hunter in the business. Rising to prominence after becoming champion of the Mandalorian Great Hunt, <name> has taken on bounties against brutal criminals, veteran Republic officers and even Jedi Masters. Now, working alongside forces from both the Sith Empire and the Republic, <name> begins the hunt for the deadliest bounty in the galaxy...."
―In-game Codex (Persons of Note)[src]

These species are available to the Bounty Hunter:

Main article: Powertech
Powertechs rely heavily on defense and advanced technology. They are able to use high-powered flame throwers to incinerate their enemies, whilst taking in tons of damage. This makes them a perfect tank in a team.

Main article: Mercenary
Mercenaries rely on taking down enemies from afar in a quick and efficient manner. Mercenaries are able to use rockets to heavily damage their enemies from great distances. Along with this, Mercenaries have the unique ability to heal their teammates.

Due to the often dangerous status of Bounty hunters' targets, a Bounty hunter must be prepared for anything that is thrown their way, from blaster bolts to lightsabers. A Bounty hunters' primary weapon is their ever-present blaster, which is their main offensive. The Bounty hunter is primarily a ranged class; doing it's best damage from far away and keeping out of range of powerful melee weapons. In addition to their blasters, Bounty hunters also carry compact rockets, flamethrowers, explosive darts and missiles inside their armor.

The D5-Mantis Patrol Craft is the starship that all Bounty hunters are awarded. This ship is gained after finishing the Dromund Kaas storyline, during which your handler for the Great Hunt tells you to steal a ship for the Hunt itself, as part of an old tradition. The Bounty hunter is then required to break into the hangar the Mantis is housed in, defeat the deck hands around it and take off in the stolen vessel.

The Mantis is a powerful attack spacecraft, built to match the attack power and speed of larger vessels, but with less space. This would result in a cramped, uncomfortable interior for the ship's crew, however the designers have made good use of vertical space and small bulkheads to give the ship a very large and open-feeling inside. The Mantis' unique feature are the three extendable engines on "limbs" that stretch out from the bottom and both sides of the ship. These engines are folded in for landing, and are re-extended when the Mantis takes off. Two of the three primary blaster cannons are mounted on the left and right limbs of the Mantis, while the third is placed underneath the main cockpit. 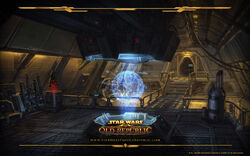 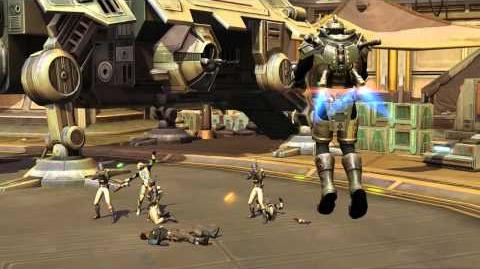 Retrieved from "https://swtor.fandom.com/wiki/Bounty_hunter_(playable_class)?oldid=112641"
Community content is available under CC-BY-SA unless otherwise noted.