Cestus was a male human Sith Lord who served the Sith Empire during the Cold War against the Galactic Republic.

As a Force-sensitive human, Cestus was brought to Korriban to learn the ways of the Sith. Eventually he earned the title Sith Lord and was stationed in the Second level of the Sith Academy to watch over his acolytes. He was killed on Korriban by a Republic strike team. 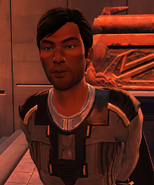 Retrieved from "https://swtor.fandom.com/wiki/Cestus?oldid=113050"
Community content is available under CC-BY-SA unless otherwise noted.