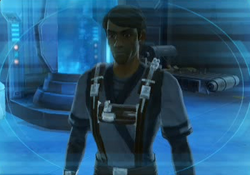 Split by Rebellion is a codex entry found within the Lore section of a player's codex once it has been unlocked. It can be earned on the planet Ord Mantell and provides a brief background and summary of the civil war taking place on the planet.

The Split by Rebellion codex entry is unlocked by players belong to the Galactic Republic faction after speaking to Jaen Kett, a human doctor trapped on Mannett Point when the bridge was destroyed. Speaking with Kett is an objective of the mission Victims of War.