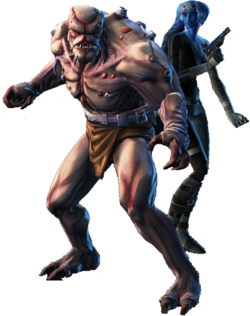 Companions are NPCs that accompany players during gameplay, the first being acquired while on the player's starting planet. Each class can unlock five unique companions over the course of the game in addition to a generic ship droid companion and two bonus companions which can be unlocked through missions. Companions provide commentary, combat support depending on their specialization, and perform Crew Skills. Players gain influence faster or slower with them depending on conversation choices and by giving gifts. Some companions are romance options. To speak with a companion in private and accomplish their individual missions, simply take them to a cantina or starship.

During the original class storylines, each class will progressively unlock five story companions and one ship droid companion. Each of these story companions will have their own individual storylines that players can choose to explore through conversations. As their backgrounds are explored, players will learn more about where they came from, meet their own friends and family, and even battle together against their own personal enemies.

There are also a few special companions to unlock through various missions and rewards.

Starting in Knights of the Fallen Empire, there are several new companions available to players as well as returning companions, some of which were formerly exclusive to specific classes or factions..

The Cartel Market allows players to acquire additional companions. There are two types of companions that can join players in battle: creatures and droids.

Players can customize the look of their companions, including armor, weapons, and physical appearance. Equipment has no effect on a companion's attributes and companions can only equip the type of equipment they are skilled in. To change a companion's equipment, open the Character Sheet in-game and click on the Companion tab. Players can then drag and drop any equipment from their inventory into the appropriate slot.

Companion vendors are scattered throughout the galaxy and will have tokens that will change the physical appearance of certain companions. These changes could be different paint jobs for droids or even changing the race and hairstyle of humanoid companions.

Players can give their companions gifts, which will improve the player's influence with their companion. This in turn gives companions bonuses to combat, mission time, and mission critical. Each companion has gift preferences, which are detailed on the gifts page.