Companions are non-player characters that the players are able to recruit to accompany them on their adventures. Each companion character has special skills that unlock over time as they level-up alongside the player character.[1]

Companions are able to fill the role for a group in a Flashpoint or group quest.

However, they cannot be used in an Operation.[2]

During a player's main storyline, they can obtain up to six companion characters at one time. With the addition of Section X on Belsavis it's now possible for all classes to gain a seventh companion, HK-51, once they reach level 50. Only one can accompany the player off the player's starship.[3] Each of these companions can fill one of three roles for the player: Tank, DPS (Damage Per Second), or Healer. How those work for each companion varies.

The Tank role can be either of the following:

The DPS role can be either:

Players gain a companion very early in the game.

The roles can be changed at any time outside of combat or conversation, so each player can be accompanied by their preferred companion regardless of the role they need filled.[4]

Most of the time the player can switch companion any time outside of combat or conversation. However, there are some missions that require a specific companion to progress.

Companions are able to do solo missions by themselves as assigned by the player. (For example, see Crafting below.)

In addition, companion characters have quests for their own storyline. If the player chooses to complete a companion's quests, it can increase the influence level of that companion. This can result in rewards for the player or group that are unavailable through other routes.[5]

Equipment used by each companion is purely cosmetic, with one exception; a valid weapon has to be equipped to enable some of their abilities. Apart from that exception their equipment has no effect on gameplay.

As well as being able to equip humanoid companions with a wide variety of apparel, the player can also customize the companion's physical appearance using "appearance kits".[1] These alterations include changing the companion's skin color and tattoos.

Note that there are no outfits for companions – the companion has to be equipped with apparel for it to appear.

In the game interface, a further distinction among companions is that other players' companions are anonymous to you, being titled only as “[Player Name]’s Companion,” while your companion will display the full name.[6]

While these appearances help distinguish one player's experience from the others in the MMORPG, a feature with more direct impact is customizing behaviors. This lets the player specify which skills and abilities the companion should use and should avoid during combat.[1]

Companion characters will voice their perspectives from time to time, often giving information on current storylines and pointing out locations to visit. They may also try to influence the player's decisions. Likewise, the player will influence each companion.

The player's Influence on each companion is stored as a rank and the number of points accrued toward the next rank. More influence points are required to reach each successive rank.

Each companion has likes and dislikes that apparently don't change throughout the game and the player's influence upon them will be increased by conversation choices and other choices that the companion either approves of or disapproves of while they are present.

Progression in the relationship can open new conversation options, new quests, and unexpected plot twists. For example, companions may reveal secrets about their real identity and background.

A higher influence rank has the following effects, It:

The points accrued toward the next rank have no direct effect on gameplay beyond that it indicates how many points are still needed to reach that next rank.

It's notable that romance aspects are not required in order to play through a class storyline; however, they will likely add to the depth and tension of the narrative.[1]

As each companion acquires some influence ranks, lower rank gifts provide less influence with them.

Quality of gift also change the value of influence given.

Companions can be used to help craft, gather, and engage in missions. The basic gathering task of gathering out of nodes can be delegated to the companion currently with the player character. The default button for this is to right click on the node. The Preferences menu can be used to change this.

More extensively, as part of the Crew Skills crafting system, companions are able go on gathering assignments anywhere depending on the level your gathering skill.

Several companions can be sent on crew missions at one time, however keep in mind, that the simultaneous usage of them is restricted as followed:

Known companions from Knights of the Fallen Empire

The Droid companion T7-O1.
Add a photo to this gallery 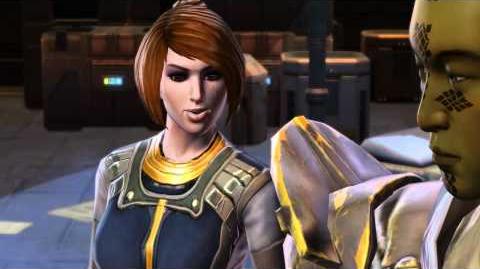 Retrieved from "https://swtor.fandom.com/wiki/Companions?oldid=117116"
Community content is available under CC-BY-SA unless otherwise noted.