"The proud capital of the Republic, Coruscant is the largest, the oldest and the most diverse city-world in the galaxy. Kilometer-tall buildings cover virtually all of the planet's surface, with the wealthy and powerful living at the top and the poorest and the most desperate dwelling near the foundations. Coruscant is only now recovering from the attack by the Empire that led to the eventual cease-fire. Many buildings were reduced to rubble; a few still burn, the fires fueled by chemicals and uncontrolled reactors. During the Empire's attacks, the criminal underworld increased it's power base as well, and remains a formidable threat."
―In-game Codex (Planets)[src]

The Galactic Center of Coruscant, the capital system of the Galactic Republic since its founding more than fifteen thousand years ago, has been the political hub of the galaxy for millennia. Home and headquarters to the Supreme Chancellor and the Galactic Senate, it is the most politically important world in the galaxy. Its towers, which are being rebuilt after the recent sacking by the Sith Empire, symbolize the power and prosperity of the Republic, which is slowly returning to its former glory.

A large number of the galaxy's trade routes go through Coruscant, making it one of the richest worlds in the galaxy. Tellingly, the planet's hyperspace coordinates are (29,0,3). Accordingly, it is the main planet of the all-important 'Sector Zero', a military designation for Coruscant and the surrounding systems.

Thermologically, the planet was composed of a molten core with a rocky mantle and a silicate rock crust. At its poles were huge ice caps. What remains of the world's natural features is minimal. Virtually the entire surface of Coruscant is now covered by sprawling urban development. Skyscrapers that stretch thousands of meters into the air. To support this massive amount of artificial construction, foundations dig deep into the planets crust with megablocks weighing hundreds of billions of tons. Coruscanti skyscrapers dwarf all the original natural features, including mountains, as well as floors of oceans which once covered a large portion of Coruscant's surface. Areas of Galactic City are broken up into levels, megablocks, blocks, and subblocks. Coruscant itself is divided into quadrants, which are divided into zones.

The upper levels of this city-planet include the major spaceports and the Senate Tower, with its lush gardens, commemorative monuments, and inspiring statuary decorating both sides of the main entrance. Transparisteel towers stretch out in all directions, and higher up, there is only the sun and stars. These beauties of the surface are limited to the elite. Walkways run between the buildings, creating a graceful, interconnected web.[1]

After the Treaty of Coruscant though, many parts of the city-world are still in ruins or under control of the gangs. For example, groups such as the Justicars have claimed buildings on higher levels and threaten even larger sections of the city.[2] Only the parts of the planet critical to governance and trade are being secured and rebuilt.

Below the skyscrapers is Coruscant's undercity. Artificial lighting illuminates these lower levels where sunlight can never reach and advertisement holograms can be seen everywhere. There are numerous establishments for entertainment, catering to a myriad of alien species. These residents are collectively referred to as Twilighters.

While these lower levels of the planet may not have been direct targets of Sith attacks in the Sacking of Coruscant, this region of continual night, with metal structures overhead as well as on all sides, is not necessarily safe. It has long been a haven for criminals. Few security patrols dare to travel far into this lawless territory. As a result, even traffic becomes erratic and dangerous, with unregistered transports full of illegal aliens and modified aircars enjoying full freedom.[3]

The Matrix Shard Assembler & Disassembler can be found in Coruscant - Jedi Temple.

This video shows all datacron locations in Coruscant. 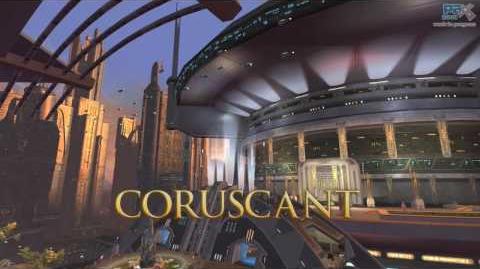 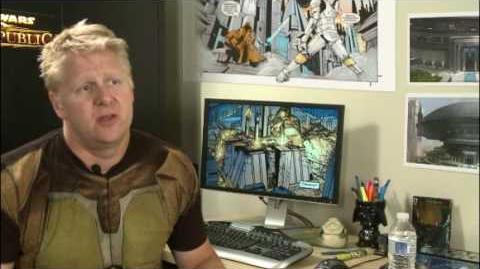 Retrieved from "https://swtor.fandom.com/wiki/Coruscant?oldid=110454"
Community content is available under CC-BY-SA unless otherwise noted.