Dark Jedi, also known as "Fallen" Jedi, is a title that refers to Jedi who have gone rogue and fallen to the Dark side; but are not actual Sith.

During the Jedi Civil War Dark Jedi served the Sith Empire (Jedi Civil War) as leaders of its armies and agents sent to hunt those their Sith superiors ordered. It appeared that they were unlike those who received training on Korriban and after turning their backs on the Jedi they received no Sith training and went straight off to fight the Jedi.

During the Capture of Darth Revan, many Dark Jedi protecting the Dark Lord fell to Bastila Shan and her Jedi strike-team as they progressed through his flagship to the Bridge to confront him.

After Darth Malak assumed control of the Sith Empire he blockaded the planet Taris and sent his apprentice, Darth Bandon, with a team of Sith Troopers and Dark Jedi to capture Bastila Shan aboard the Endar Spire.

After she managed to escape Taris alive Dark Malak dispatched squads of 3 Dark Jedi to capture or kill Bastila on Tatooine and Kashyyyk. Dark Jedi also encountered the amnesiac Revan in their base in Ahto City on planet Manaan. All teams of Dark Jedi were subsequently killed.

The current Sith Empire isn't known to utilize Dark Jedi, instead they prefer to train their force users to become full Sith. This is likely because they had the time before, during and after the war in which to train them, unlike the Sith Empire during the Jedi Civil War who needed them immediately to power and lead their war effort which resulted in many not actually receiving training in it's New Sith Order.

Independent Dark Jedi were better known during the Great Galactic War, some even served the Republic. One such Dark Jedi was Dar'Nala who fell to the Dark side whilst attempting to destabilize the Treaty of Coruscant.

Dark Jedi now during the Cold War are still not known to serve the Sith Empire.

The Jedi Knight and the Jedi Consular have the ability to become Dark Jedi should they fall away from the Councils teachings and give into the Dark side, although they do remain loyal to the Republic and the Jedi Order. 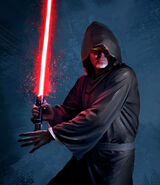 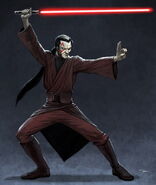 A Dark side Master in an apparent Soresu stance.

A typical Dark Jedi during the Jedi Civil War.
Add a photo to this gallery

Retrieved from "https://swtor.fandom.com/wiki/Dark_Jedi?oldid=114934"
Community content is available under CC-BY-SA unless otherwise noted.