"A militaristic and maniacal Sith warlord famous for his brutal tactics, Darth Angral led the Imperial fleet that sacked Coruscant during the last war. Angral personally executed the Supreme Chancellor and was preparing to force an unconditional surrender when the Emperor unexpectedly signed a peace treaty with the Republic. Darth Angral was furious to see his victory dissolve into a protracted and unresolved cold war. Although his success on Coruscant opened a path to the Empire’s fabled Dark Council, Angral abandoned Sith politics to pursue a private agenda. He spent years after the war consolidating a significant power base. The culmination of Darth Angral’s plans to finally destroy the Republic unraveled on Coruscant when his son Tarnis was exposed as an undercover Sith infiltrator and killed by Jedi. Seeing his only son cut down drove Darth Angral over the edge, setting him on a path to utterly annihilate the Republic or die trying."
―In-game Codex (Persons of Note)[src]

"I foresaw this confrontation. I welcome it."
―Darth Angral to the Jedi Knight.[src]

During the Great Galactic War, Darth Angral was selected to lead the Imperials that would assault Coruscant. Under his command were Darth Malgus and Angral's own political ally Lord Adraas. On Alderaan, peace talks between Republic and Empire were in progress, and the Sith emissary was Angral's bitter rival Darth Baras. However, the "negotiations" were merely a distraction, and the attack on Coruscant was a method of forcing the Republic to agree to the peace treaty that had been introduced by the Sith Emperor himself. During the battle on the Republic capital, Darth Angral personally infiltrated the Senate Building, and decapitated Supreme Chancellor Berooken on a live feed to the horrified Republic diplomats on Alderaan. The signing of the Treaty of Coruscant angered Darth Angral, and he returned to Korriban. There, Darth Baras was in an audience with the Dark Council; reporting on the negotiations on Alderaan.

Angral attacked Baras, who quickly subdued him with a blast of Force lightning while stating that he was following orders issued by the Emperor. During the Cold War, Angral was served personally by his three apprentices, Lords Nefarid, Sadic and Praven. In addition, Lord Praven instructed Angral's own son, Tarnis, in the ways of the Dark side, and the young Tarnis eventually was elevated to Sith Lord. Lord Tarnis was deployed to Coruscant with the task of infiltrating the Republic military. The son of Angral eventually became one of the chief scientists under General Var Suthra, and designed the Planet Prison superweapon. "Doctor" Tarnis' creation ionized a planet's atmosphere, making it impossible for starships to leave or enter. His true intent was to use the Planet Prison to hold the entire Republic capital hostage, a notion which Angral praised. The Jedi were disappointed to learn that the Republic had not informed them of the creation of the Planet Prison, and,

shortly after, Tarnis employed the Black Sun pirate syndicate to fabricate his own kidnapping, so that he may escape the eyes of the Republic and deploy the Planet Prison from a secure location. Tarnis ventured to the ruins of the Coruscant Jedi Temple, where the superweapon entered its activation sequence. However, a young Jedi Knight, the former apprentice of Orgus Din, intervened with the hopes of deactivating the Planet Prison. Darth Angral and his subordinates observed as Tarnis engaged the Knight, but was quickly defeated and killed. An enraged Angral swore revenge on the Republic and the Knight, promising that countless individuals were now doomed because of his son's death. Angral dispatched his three apprentices across the galaxy as a part of his war of vengeance, but ironically, Angral's favored apprentice, Lord Praven, saw dishonor in his master's actions and was brought to the light by the same Jedi Knight that had killed Tarnis.

Despite the multiple setbacks, including the deaths of apprentices Nefarid and Sadic and Praven's conversion to the light side of the Force, Darth Angral constructed the Desolator superweapon. Back on Alderaan, Jedi Master Orgus Din managed to put a tracking beacon on Angral's ship and faced him, but was killed right before the eyes of the Knight, live on The Holonet. However, Angral still regretted not being able to slay them both at the same time. Angral fitted the Desolator onto the Oppressor, his flagship, and tested its firepower on the planet Uphrades. Departing the devastated planet, he set course for Tython. But, the same Jedi Knight that had brought him pain and torment arrived and boarded the Oppressor. Darth Angral welcomed the confrontation between him and the Knight, but was ultimately defeated after a fierce duel on the dreadnought's command deck. 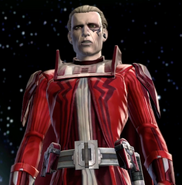 Retrieved from "https://swtor.fandom.com/wiki/Darth_Angral?oldid=110740"
Community content is available under CC-BY-SA unless otherwise noted.