The Daybreaker is a Wanderer-class transport that served in the Republic Navy as a medical frigate during the Cold War.

The Daybreaker under the command of Captain Dal and Doctor Senessa, traveled to the Uphrades system in order to deliver a shipment of medical supplies. The vessel however, arrived in the system just as the Harrower-class dreadnought Oppressor attacked the agriworld with the Desolator superweapon. The Oppressor's commander, Sith Lord Darth Angral, sent boarding pods to destroy the frigate while the Oppressor left the system, and the Daybreaker's military complement were unsuccessful in preventing the boarding.

Not long after the Daybreaker was boarded, the Jedi Knight and company arrived in the system, and Captain Dal's emergency broadcast drew the Knight to the stricken vessel. With the Jedi's help, the crew were able to defeat the Imperial boarders. Doctor Senessa then assumed command of the ship when Captain Dal refused to aid the survivors on Uphrades ruined surface. The Daybreaker was then intentionally stranded on Uphrades so that it's crew could help those left on the surface to survive long enough for Republic aid arrive. 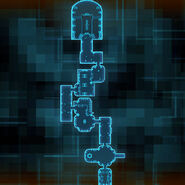 Retake the Daybreaker in game map.
Add a photo to this gallery

Retrieved from "https://swtor.fandom.com/wiki/Daybreaker?oldid=110490"
Community content is available under CC-BY-SA unless otherwise noted.