"Our time has come. For 300 years, we prepared. We grew stronger. While you rested in your cradle of power, believing your people were safe... and protected. You were trusted to lead the Republic but you were deceived, as our powers over the dark side have blinded you. You assumed no force could challenge you and now...finally...we have returned."
―Darth Malgus during the invasion of the Jedi Temple —

Deceived is the first trailer released by BioWare for the upcoming video game, Star Wars: The Old Republic. Released on June 1, 2009, Deceived was the first of its kind for a Star Wars video game. Breaking from the normal use of in-game scenes and graphics for trailers, the nearly four-minute long Deceived video instead depicts a never-before-seen event in canon that takes place prior to the game's start: the Sacking of Coruscant. Deceived was rendered entirely in photo-realistic CGI by Blur Studio on behalf of BioWare and LucasArts, with the use of motion-capture techniques and fight choreography.

In the year 3,653 BBY, a shuttle travels toward Coruscant. At the same time, a black-cloaked figure—Darth Malgus—and his female Twi'lek escort, Eleena Daru, move up the steps of the Jedi Temple where they are met by several members of the Temple Security Force. Drawing a red lightsaber, Malgus dispatches the guards with a series of quick slashes and the use of the Force. Atop the main entryway, a crouched woman, Shae Vizla, takes her signal from Malgus, and infiltrates an upper level of the Temple using her jetpack. Vizla proceeds to kill several more guards with her blaster, before checking the holographic display on her gauntlet, monitoring the progress of the shuttle. Casually striding into the Temple, Malgus and Daru are met with well over a dozen Jedi, including Jedi Master Ven Zallow, who surround the pair with active lightsabers. As if on cue, the shuttle violently crashes through the Temple entrance, smashing through old stone columns before finally coming to rest a short distance behind Malgus. The shuttle's boarding ramp lowers, revealing another cloaked figure who proceeds to ignite a red lightsaber; taking a few steps forward, the darkness behind him is illuminated by the activation of over twenty more blades of crimson energy.

These Sith Warriors pour from the shuttle, charging the Jedi Knights in a battle that quickly overtakes the Temple's entrance hall. A series of Jedi and Sith fall in the battle, as Daru fires at Jedi from the Sith Lord's side before taking cover behind a still-standing pillar. Vizla moves through the Temple with her jetpack, mowing down Temple guards attempting to assist the besieged Jedi, with wrist rocket and a flamethrower. Malgus cuts down numerous Jedi with his lightsaber, striking at others with streams of Force lightning, and simply lifting and throwing another Jedi with his bare hand. Ven Zallow, who had fought with Malgus prior to the shuttle crash, slams the female Twi'lek into a downed column with a Force push before attacking Malgus directly.

The two clash in a duel through the chaotic battle still being waged around them. When Zallow leans backward to avoid a deadly high swing, Malgus kicks him several feet back through the air; Zallow takes the ever-so-brief intermission from their duel to strike down two nearby Sith warriors. Malgus throws his lightsaber, which Zallow leaps over, only to be struck by a powerful Force push that throws him through a piece of the collapsed rubble. Malgus summons his airborne lightsaber back to his hand while leaping over the debris, attempting to impale Zallow as he lies on the ground. The Jedi, however, recovers quickly from the impact and manages to avoid the Sith Lord's lethal blow by jumping clear. He strikes back at Malgus with a vicious series of fast-paced strikes, stunning the Sith Lord with a punch to the face. When his next swing misses and he spins to gather momentum for another strike, Malgus rushes in and impales Zallow through the torso, stating that the Jedi had been deceived by the Sith and because of that deception, the Republic would fall.

Defeated, the Jedi Master falls to his knees as Malgus turns away, deactivating his lightsaber. In his final moments, the master stares out at the burning cityscape as Sith starfighters fly overhead, Sith war droid Mark IIs march up the Temple steps, and Sith warships loom in the distant sky. He pitches forward onto the ground as the starfighters unleash a barrage of laser cannonfire on the Temple and the surrounding district, pillars of thick smoke rising into the air. Malgus walks out of the Temple as spires and statues collapse behind him, raising his hood as the Temple is engulfed in flames. 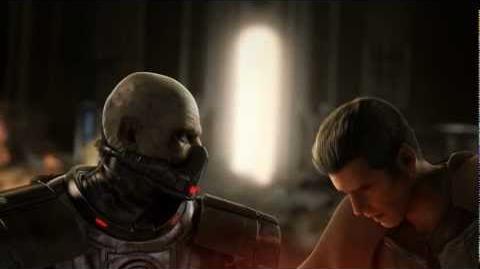 Retrieved from "https://swtor.fandom.com/wiki/Deceived_(cinematic)?oldid=95980"
Community content is available under CC-BY-SA unless otherwise noted.