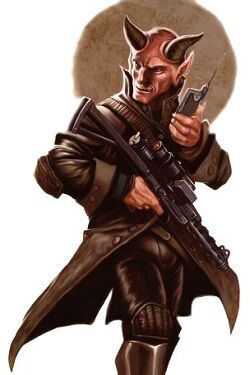 Devaronians are a sentient species.

Devaronians are a humanoid species from the world of Devaron, easily recognizable by their horns. Such horns are believed to be a genetic mutation occurred during their evolution, as they would have helped them fending off the predatory birds living on their planet. Now, such horns have only aesthetic purposes, and all the male Devaronians are known to be quite proud of them. They are generally avoided by most species, mainly due to the aggressive nature of male Devaronians and their resemblance to the devils of several different myths.

The female Devaronians, however, are dramatically different. The red Devaronian skin is covered by a thick layer of fur, and they are hornless. The differences with their male counterparts are not only superficial, though, as the female are generally much less aggressive but rather dominant, and because of that, they are the only ones allowed to participate in Devaronian politics.

The arrangement of the Devaronian society is quite peculiar: the males, due to their exploratory instinct, leave their home planet and their families rather early to wander in the universe, and it's also thanks to this that the Devaronians were one of the first species to develop interstellar travel. The females, on the other hand, prefer to remain in Devaron and run the planet's government while looking after the young.