"Dewbacks are omnivorous reptiles that originated on Tatooine, where settlements, moisture farmers and Sand People alike use them as work beasts and transportation, and where wild dewbacks still roam the planet's deserts and canyons. Over time, the sturdy creatures have been exported to other worlds and found similar utilitarian niches elsewhere. Centuries ago, Czerka Corporation scientists attempted to breed "war dewbacks" that were larger and more aggressive than their easily domesticated cousins. Although the scientists eventually succeeded, the project was written off as a failure when the test herd broke out of its enclosure and rampaged through the research facility."
―In-game Codex (Bestiary)[src]

Dewbacks are a race of large omnivorous reptilian animals native to the planet Tatooine. As such, they are well-adapted to the harsh desert climate. This and the fact that they can be easily domesticated, makes them commonly employed as beasts of burden by both the inhabitants of the desert planet and the off-worlders wandering its dunes. Due to their numerous useful traits and versatility, they are quite possibly the most respected of all the creatures native to Tatooine. They can also be seen in the streets of Balmorra. 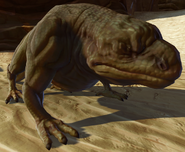 Retrieved from "https://swtor.fandom.com/wiki/Dewbacks?oldid=112911"
Community content is available under CC-BY-SA unless otherwise noted.