"Powerful fleet-destroying technology, the Silencer is a ship-mounted cannon designed to be fired over long ranges. The visible energy beam created by the Silencer is capable of obliterating capital ships, but more significant is the beam’s blossoming effect–a rippling wave of radiation cascading outward from the beam with range and destructive power sufficient to destroy an entire enemy armada. Dependent on a rare and costly new chip called the CN-12, the Silencer prototype originated under the aegis of the late Darth Mekhis. When Mekhis died, her half-completed technology was left to the military to develop further–but when it became clear that progress was slow, the powerful Sith Lord Darth Thanaton deemed the Silencer project too costly and out of line with the Empire’s goals to continue. Moff Pyron, the officer who was assigned to oversee the Silencer, saw potential that Darth Thanaton did not. Since then, he has ensured that the prototype’s continued development behind Thanaton’s back."
―In game codex[src]

The Doombringer was a Harrower-class dreadnought fitted with the Silencer, a superlaser capable of destroying an entire fleet.

The Doombringer saw action during the Cold War and was chosen to be the first Harrower-class dreadnought to carry the Silencer. The Sith Inquisitor visited the Doombringer to see the superlaser's power for himself, hoping that the demonstration could help him gather allies in the Empire. After the Silencer destroyed an entire Republic fleet, the Inquisitor ordered that all the dreadnoughts under the command of his allies were to be equipped with the Silencer megalaser. 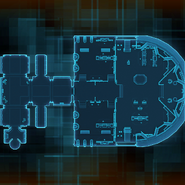 Retrieved from "https://swtor.fandom.com/wiki/Doombringer?oldid=105971"
Community content is available under CC-BY-SA unless otherwise noted.