"Janarus had long served the Republic people as Coruscant’s Senator when the Sith Empire’s reemergence thrust him into prominence. Later, with the Republic struck humble and leaderless during the Sacking of Coruscant, it was Janarus’s authority and resolve that earned him respect from the citizens and Senate alike. Janarus was unanimously elected to the office of Supreme Chancellor, where he has remained ever since. Support for Janarus has steadily fractured over the years, however, as many planetary governments have chafed at the costs of rebuilding Coruscant. Military advisors also grow increasingly frustrated with Janarus’s refusal to stamp out sedition, but his stance has always been to protect the Republic’s core values of freedom, justice and the right to self-governance."
―In-game Codex (Persons of Note)[src]

Dorian Janarus is the male Human Supreme Chancellor of the Galactic Republic.

The Supreme Chancellor is a man with the weight of an entire galaxy on his shoulders. When tensions run high in the Senate, and systems threaten secession over cooperation, it falls to him to maintain order. When armed conflicts erupt at the borders of Imperial space, he is the one who must face the public's outrage and keep the peace. When the Republic fails in its duties and the best laid plans have gone awry, he must accept the blame and the responsibility of making things right. It's a heavy burden, but it's one he is honored to bear.

Supreme Chancellor Janarus had long served the people of the Republic as Senator of Coruscant before the reemergence of the Sith Empire thrust him into the seat of power. Struck humble and leaderless by the carnage of the Sacking of Coruscant, it was the resolute leadership with which Janarus pulled his crippled homeworld back together that earned him the unified respect of the people and the Senate alike. When the assembly next met, Janarus was unanimously elected to take up the office of the late Supreme Chancellor who was lost in the attack.

In the years since his inauguration as Chancellor, the unified support of his peers has steadily fractured as many system governments continue to chafe at the costs of rebuilding and his military advisors grow increasingly frustrated with his refusal to take sterner action to stamp out sedition, but Janarus's stance has always been that the Republic's core values of freedom, justice, and the right to self-governance are that much more important to protect when standing in the face of the brutally tyrannical Sith Empire. 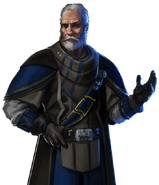 Retrieved from "https://swtor.fandom.com/wiki/Dorian_Janarus?oldid=115491"
Community content is available under CC-BY-SA unless otherwise noted.