Eskella Gryton was a female human Sith Acolyte who served the Sith Empire during the Cold War against the Galactic Republic.

Noticing Eskella's Force-sensitivity, Tremel took her to the Sith Academy, where she would learn the ways of the Sith, 6 months later acquiring a new blade. Soon after, seeing that the Sith Warrior, a newly arrived trainee, had acquired a new weapon too quickly, she expressed her discord, only to be reminded by her father of her place, also being warned not to tell anyone.

Later, after the Sith Warrior had killed or spared Tremel and gotten a lightsaber, she again appeared near Darth Baras' quarters telling him/her that Tremel didn't have to die. Whatever the ascending Acolyte had previously done with Tremel decided Eskella's fate of either dying at the hands of the Sith Warrior or going after her father, later being killed by Tremel. 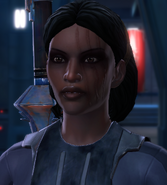 Retrieved from "https://swtor.fandom.com/wiki/Eskella_Gryton?oldid=113125"
Community content is available under CC-BY-SA unless otherwise noted.