"Although the governing bodies of the Sith Empire and the Galactic Republic conceded to Arcann's control, not everyone was content with becoming a resource farm for Zakuul. Chief among these rebels were Lana Beniko and Theron Shan. While Theron used his contacts from SIS to amass specialists to aid their fight against Arcann, Lana teamed up with Koth Vortena to break out the legendary Outlander--the only person they believed capable of wrangling so many different parties together under one banner. Although relatively small compared to Zakuul's forces, the Alliance has the Gravestone and experts in multiple fields at their disposal. With proper leadership, this coalition could not only defeat Arcann, but change the galaxy forever."
―In-game Codex (Organizations)[src]

The Eternal Alliance, simply known as the Alliance, is a military organization formed by the Outlander. The Alliance was initially a resistance movement to the formerly dominant Eternal Empire and sought to overthrow the tyrannical Emperor Arcann, and later Empress Vaylin. Eventually defeating both Arcann and Vaylin, the Alliance would seize the throne after defeating the last forces of the Empire in the Battle of Zakuul. The Alliance would then be reorganized by the Outlander, and transformed into the Eternal Alliance. All military assets of the Eternal Empire, including its enormous fleet, would be absorbed into the Alliance. With control of the Eternal Fleet, the Alliance was a force to be reckoned with and was considered the most powerful faction in the galaxy. 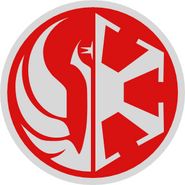 Eternal Alliance logo.
Add a photo to this gallery

Retrieved from "https://swtor.fandom.com/wiki/Eternal_Alliance?oldid=119122"
Community content is available under CC-BY-SA unless otherwise noted.