Force jump, also known as Force Leap, is one of the basic force powers that a Jedi and Sith can master, the principle is easy; the Force-user utilizes the Force to push himself/herself higher than a humanoid can possible attempt to jump normally.

In games, it is useful in fights to confuse your opponents' aim or to throw off their attack patterns. It is also useful for getting up to high places where a normal person can not get up unaided.

In Star Wars: The Old Republic, Force jump is an active force power that fills the damage role.

Jumps to a distant target, dealing 1525-1654 damage with the main-hand weapon, immobilizing the target for a 2 seconds and interrupting the target's current action. Builds 3 focus. Cannot be used against targets in cover. 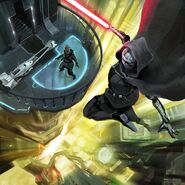 Retrieved from "https://swtor.fandom.com/wiki/Force_jump?oldid=116951"
Community content is available under CC-BY-SA unless otherwise noted.