Force lightning is a well known force power, most often used by practitioners of the Dark side of the Force, especially the Sith. The ability is commonly referred to as Sith lightning; because of the usual users.

In Star Wars: The Old Republic, Force lightning is an active force power that fills the damage role.

Force lightning is a purely offensive, energy-based attack that channeled Force energy down the user's limbs, hurling arcing bolts of electricity from the wielder's fingertips or palms; Force lightning could be executed with either one or two hands. Powerful discharges would branch out into dozens of smaller forks, thus skilled practitioners could target several foes at once.

The intensity varied based on a number of factors. A skilled user could render a target unconscious with only a short burst. A single, powerful blast was sufficient to kill a person instantly; for example, Darth Malak's lightning would not only caused severe physical damage but also unbearable agony to the victim led to it being widely used as a form of torture, as when Malak used it upon Bastila Shan, having captured her on board the Leviathan and having brought her to Lehon, where he converted her to the dark side.

Depending on the level of intensity, Force lightning could ground itself on an ignited lightsaber, with no apparent ill effect on the lightsaber's operation. Powerful Light side Force-users are sometimes able to resist the attack or even block the lightning completely. Force lightning can also be absorbed and redirected by a Jedi of sufficient skill; Revan demonstrated great proficiency in this ability; he used his bare hands to absorb a very powerful barrage of Force lightning from Darth Nyriss and then deflected it back at her, destroying her with her own power in the process. There even existed an advanced version of Force lightning which may have been used by Meetra Surik and Revan in the Jedi Civil War.

Deals 4035 energy damage to the target and consumes 40 Force over the duration of the channel. Also slows the movement speed of the target by 50% and immobilizes weak and standard enemies.

Force lightning is an active force power that fills the damage role.

Force lightning use by Jedi

Force lightning ability is not restricted to Dark side Force-users. Jedi and other Light side Force-users who were strong of will and character could learn this power without falling to the dark side but it's use was viewed as inherently corrupting and most members of the Jedi High Council forbade it's use.

Despite this, some Jedi refused to dismiss the natural power of this power. During the Great Sith War, Jedi Master Lian Dray used Force lightning against the Sith apprentice Sindra. Revan, Meetra Surik, Jolee Bindo, Bastila Shan and Vrook Lamar were amongst it's users during the Mandalorian Wars, the Jedi Civil War and the Jedi Purge.

Force lightning required a living conduit for the energy to be channeled, Jorak Uln, the former headmaster of the Sith Academy on Korriban who hid in the Valley of the Dark Lords during the Jedi Civil War, would sometimes kidnap and torture Sith students. One of his favorite games was testing his captives on Sith philosophy, punishing their failure with Force lightning, often until they were killed. Darth Malak used Force lightning as a means of torture to turn Bastila Shan to the dark side. It was intended to give her a "taste" of the dark side's power, a technique that eventually succeeded. Vitiate's Force lightning was so powerful that he overwhelmed the Jedi Master Revan, to a degree that Revan's mask started to melt into his skin.

Force shock is a Force power that allowed the user to create an energy spark that would track and damage the nearest enemy. The shock could be thrown at an opponent to stun and injure them, or could be set loose to track an opponent until it dissipates. The shock would not last more than five seconds or so before disappearing into a tiny burst of heat, but it was a useful technique for Sith apprentices.

Force storm is a Force lightning variant. The user would raise his palm upward and would create, through the Force, an explosion of electrical energy directed at all foes in the vicinity. It also appeared as a tornado of energy which created a great disturbance in the Force. Jedi could also join together to create a Force storm, though its use was frowned upon by more orthodox Jedi. Unlike Force lightning; Force storm was not limited to attacking enemies in one direction, as it affected all foes within a certain radius from the user. Some notable practitioners of this power are Revan, Darth Nyriss and Vitiate.

Chain lightning is a variation of Force lightning with the difference being that the lightning is able to strike one person and then move to another or several others. As it is more powerful than the standard lightning, it required a greater amount of discipline and concentration to project and sustain the stream of lightning.

Sith barrage is a variant of Force lightning that allowed users to create a bolt of lightning up from the ground damaging anything in it's way.

A powerful variation of Force lightning. The Force-user blasted an opponent with lightning, and then, using the Force, caused the lightning to amplify within the victim's body until it reached a critical point and exploded out of the victim. The explosion would also shock and kill anyone unlucky enough to be standing near the victim when the explosion occurred.

Lightning Burst is a variant of Force lightning, where the user would have ligtning arc out from their body to strike adjacent enemies.

While most Force lightning manifested itself as blue, it can also appear as purple, though whether or not the color is distinctive was unclear; for example, Darth Traya, Darth Nihilus and Darth Nihilus had all used blue lightning. Dark side Force-users like Vitiate and Darth Nox were all seen wielding purple lightning. 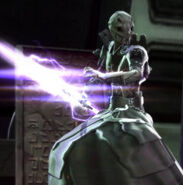 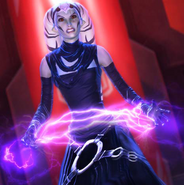 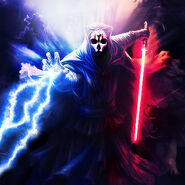 Retrieved from "https://swtor.fandom.com/wiki/Force_lightning?oldid=116953"
Community content is available under CC-BY-SA unless otherwise noted.