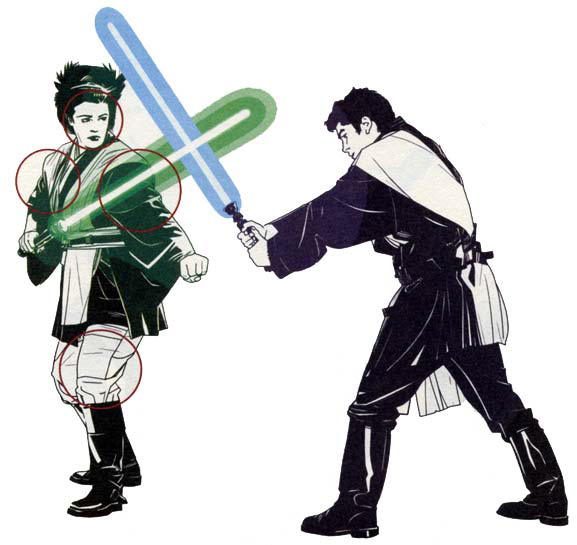 Form I: Shii-Cho, also known as The Way of the Sarlacc or The Determination Form, was the first of the seven forms of lightsaber combat. This combat form was developed during the transitional period within the Jedi Order from ancient metal swords to more contemporary lightsabers. Shii-Cho was intended to cater to these new weapons, establishing the basic motions and target zones utilized with a lightsaber. As Shii-Cho was effectively an experimental combat form, and was created prior to the emergence of Dark Jedi and Sith Lords, it did not address the issue of lightsaber-to-lightsaber combat, and was quickly replaced by Form II: Makashi. Despite this, Shii-Cho continued to find a niche as a training form, with almost every Jedi duelist receiving some instruction in it, and including elements in their own combat styles. Shii-Cho was considered an effective fall-back option when no other form or combat style would do.  In combat, Form I lightsaber combat was wild and raw, relying on deliberate tactics and being primarily aimed towards disarming rather than injuring foes, in keeping with Jedi philosophy. Basic initiates in the style demonstrated rather clumsy performance, though in the hands of a master, Shii-Cho was fluid but highly randomized and unpredictable.

Retrieved from "https://swtor.fandom.com/wiki/Form_I:_Shii-Cho?oldid=84017"
Community content is available under CC-BY-SA unless otherwise noted.