"Short, squat humanoids, Gamorreans are easily identifiable by their greenish skin and porcine features. On their homeworld, they live in clans, where the male boars serve exclusively as warriors while the female sows tend the day-to-day affairs like farming, raising young and crafting weapons. Known for their physical strength and endurance, Gammoreans are generally considered a species of below average intelligence. Unable to speak Basic because of their physiology, most Gammoreans are still able to comprehend it and find a place in the galactic community as soldiers, guards or mercenaries. Due to their reputation for violence and brutality, they are often employed by crime lords, gang leaders and various other criminal elements."
―In-game Codex (Species)[src]

Gamorreans are a race of porcine humanoids native to the planet Gamorr; where their technological level is equivalent to lower technology periods that human civilizations experienced more than 20000 years ago. They also colonized the planet Pzob in the K749 system and are the majority sentient species on Lanthrym in the Elrood sector.

Their vessels provide only essential amenities as well as shields and weapons. Gamorreans are typically green-skinned with a large powerful physique, and are known to be fierce warriors prized for their great strength and brutality in combat. They are organized into clans headed by a Council of Matrons. In Gamorrean society female sows perform all the productive work while the male boars concentrate on training for and fighting wars. They speak Gamorrese (also called Gamorrean).

One of their favorite weapons is a traditional war axe called an arg'garok that is forged specifically for beings of extraordinary strength and a low center of gravity. Gamorreans live in clans and these clans are the basis for their wars. Clans are ruled by clan chieftains or warlords, and a council of females, called matrons. Clan females are all related, and can trace their ancestry to a common matriarch. A Gamorrean clan typically consists of about 20 sows and 50 boars, but these numbers vary widely. 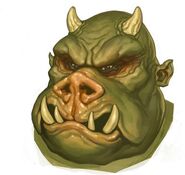 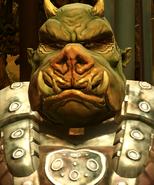 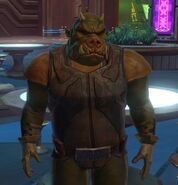 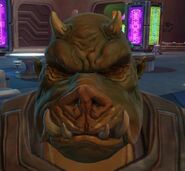 Gamorrean.
Add a photo to this gallery

Retrieved from "https://swtor.fandom.com/wiki/Gamorreans?oldid=115337"
Community content is available under CC-BY-SA unless otherwise noted.