Start a Wiki
Gesen is a male human Sith Inquisitor who served the Sith Empire during the Cold War with the Galactic Republic.

During the Cold War, a period of great tension between the Sith Empire and the Galactic Republic, Gesen was stationed in the Tomb of Ajunta Pall, where he was tasked with protecting one of the entrances and providing training for other acolytes.

Gesen first appeared in the 2011 Bioware MMO Star Wars: The Old Republic. He is located on Korriban, in the Tomb of Ajunta Pall and is the trainer for the Sith Inquisitor class. 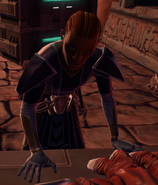 Retrieved from "https://swtor.fandom.com/wiki/Gesen?oldid=118690"
Community content is available under CC-BY-SA unless otherwise noted.