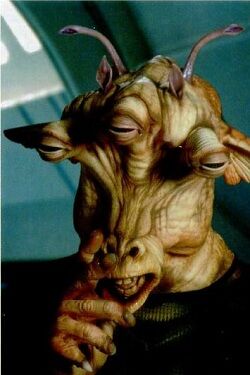 Gran are a sentient species.

The Gran are a humanoids species native to the planet Kinyen. Their most distinctive traits are their three eyes and their goat-like snouts. Their exceptional sight allows them to see more colors than more species, and even to see into the infrared. The Gran evolved from herbivorous grazing animals, and thus have two stomachs.

The Grans originated from the grassy highlands of the planet Kinyen, and are a naturally peaceful species. Thanks to the beauty of their planet, with its pure rivers and beautiful forests, the Gran developed strong bonds of home and family. They also make extremely protective parents, and for some the Grans are the species most devoted to family in all the galaxy. The young Grans are taught a single, specific job that best servers his or her talents, and while for them such a system is essential, it is often criticized by other species.

On the other hand, this attachment to home and family causes an extreme need in every Gran to find a companion to accompany them for life. A lone Gran falls quickly into depression and may go insane or even die of loneliness, and exile is their most feared punishment. Outcast Grans are often seen wearing black clothing in order to avoid the painful memories of the colorful cities of his or her homeworld.