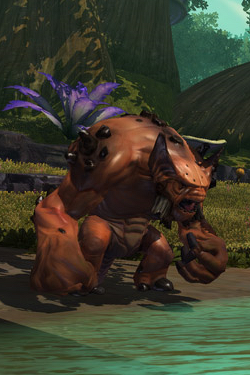 Though they are considerably smaller than the average rancor, gundarks are often considered just as dangerous. While rancors dominate other species through their massive size and strength, gundarks are more notorious for their speed and brutality. This is not to say gundarks are weak—they're generally about twenty times stronger than the average man—but it's the agility and ferocity combined with that strength that makes them so deadly.

For centuries, gundarks have been among the most ambitious targets sought by big game hunters. Part of the reason lies in their instinctive social patterns. Though a lone gundark is a formidable beast, what makes these creatures exponentially more difficult to kill is that they often nest together in what appear to be primitive societies, and even when they leave the nest, they almost always travel in packs.

The final note on gundarks is to beware of their heightened sense of hearing. Though their ears are sometimes the subjects of casual jokes, their ability to detect approaching enemies is dead serious. Many a Bounty Hunter has learned all too late that the only safe way to take down a gundark is from a long distance.