Holiday is a semi-sentient holographic assistant in service to Tharan Cedrax. She accompanies him in almost all his dealings after he managed to release her from slavery to a Hutt crime lord. She dotes on him and flirts as if they were in a relationship, and even displayed potential sentience at times.

Holiday was initially constructed and used as a holographic dancer for the Hutt crime lord Glorzo, who considered her a mere exotic belonging. During the Cold War, Glorzo was visited by Cedrax, at which point he was able to see the full extent of her capabilities. Holiday was grateful for the affection and understanding shown by Cedrax, and he eventually acquired her from the Hutt's control. She became his transactions assistant while Cedrax works with technological dealings across Nar Shaddaa.

The two eventually joined the Jedi Consular near the end of the Cold War, leaving Nar Shaddaa at Cedrax's request. While traveling, Cedrax was asked to join an exclusive group of scientific minds known as the Luminatus Club, and was instructed to build a device known as a Vandyk Generator as his initiation. Realizing that he would only get one chance to use it, he instead chose to perform its functions on Holiday, giving her sentience almost to that of an actual being. 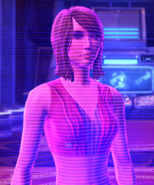 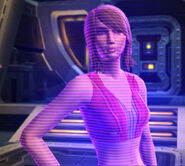 Retrieved from "https://swtor.fandom.com/wiki/Holiday?oldid=117413"
Community content is available under CC-BY-SA unless otherwise noted.