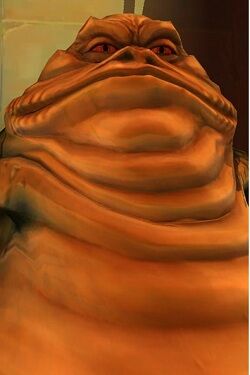 Hutts are a sentient species.

The Hutts are a large species of gastropods who control a great empire in the Hutt Space. While their adopted homeworld is Nal Hutta, their native planet is thought to be Varl, although this is not certain. Usually, the Hutts are recognized as crime lords and generally unreliable. The full grown adults of this species are very large and have a massive body-weight. As their appearance may suggest, they have semi-sedentary habits. In the Hutt society, weight is equated with power, and the thin Hutts are considered weak and inferior. Surprisingly, their thick skin hides a very powerful musculature, especially in the bigger Hutts, which allows them to move very quickly and strike powerful blows with their tails.

The Hutts are also an extremely resistant species: not only their body is immune to several substances that would be lethal to others, their mind is immune to Force mind tricks, and some rare Hutts are even Force-sensitive. Furthermore, they can also regenerate body parts when injured.

The Hutts are hermaphroditic, and while some of them are considered female and the others male, said distinction doesn't come from a biological difference, but from their own choice; in fact, even a pregnant Hutt could still consider himself male if he so prefers.

The Hutts originated on the planet Varl in the Ardos system.

The Hutt legends say, that their native planet Varl orbited around two suns, Evona and Ardos. Evona was consumed by a black hole, and in fury, Ardos expelled its gaseous external layers and destroyed the other planets of the star system. Somehow, however, Varl survived, though its atmosphere was torn away and its biosphere devastated, and left as wasteland with acid rain. The Hutts, too, survived the cataclysm, and soon left the planet. Their survival instilled in the species a sense of superiority that led the species to consider themselves almost near-godlike.

This tale has generally been dismissed as more Huttese hyperbole, and the most commonly accepted alternate theory is that the Hutts destroyed their world themselves, in some ancient war. Interestingly, there are signs indicating that the cratered wasteland of planet Varl was once a pleasant green world.

In 15,000 BBY, the Hutts migrated across space to Evocar in the Y'Toub system, which the Hutts renamed Nal Hutta, which translates to "Glorious Jewel" in Huttese. Having decided that Evocar was a suitable home, they traded their technology with the native Evocii in exchange for pieces of land. Only when it was too late, though, the Evocii realized that the Hutts were slowly buying the whole planet's surface.

The Evocii were later captured and enslaved in order to build even more structures on Nal Hutta, and many of them were relocated in the planet's fifth moon, Nar Shaddaa. While many of them worked to death or died due to the polluted atmosphere, the few survived Evocii still live in Nar Shaddaa's underslums.