"The ultimate non-Force sensitive fighters in the Empire serve the Emperor and the Emperor alone. Only Humans and Sith were allowed to be members of the imperial guard as the Emperor thought that they were the Strongest.Most citizens know them as protectors of the Sith Academy on Korriban and the sanctum of the Citadel on Dromund Kaas, the guardsmen’s mandate takes them wherever the Emperor requires. Even the Dark Council has neither control nor oversight of the guard’s activities. Clad in blood-red robes and armor, Imperial Guardsmen serve for life. Chosen for duty and initiated through deadly tests and traditions, those too old for active duty become instructors for the next generation until their skills deteriorate to the point where they are inevitably slain by a new recruit during training. Fanatic in loyalty and unmatched in martial skill, even a lone Imperial Guard is a formidable opponent capable of standing toe-to-toe with a Jedi… or a Sith, should the occasion arise."
―In-game Codex (Organizations)[src]

The Imperial Guard, also known as the Emperor's Guard and the Dark Honor Guard, is a force of elite warriors who served Vitiate of the Sith Empire as his personal protectors and enforcers. Composed entirely of non Force-sensitive individuals mentally bonded to the Emperor, they are incredibly loyal to their master and willing to lay down their lives in the service of the Sith ruler, and even the members of the Dark Council feared the Guard's prowess in combat. The members of the Imperial Guard are trained to use a wide variety of weapons and combat styles, making them more than a match for a single Jedi or Sith, and the Guard carried out the Emperor's will on battlefield across the galaxy as war broke out with the Republic.

For Republic: During mission "Down with History".

For Empire: Upon completing the quest Riot on Belsavis. 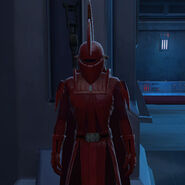 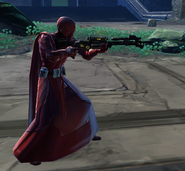 Imperial Guards wield both melee and ranged weapons.
Add a photo to this gallery

Retrieved from "https://swtor.fandom.com/wiki/Imperial_Guard?oldid=116344"
Community content is available under CC-BY-SA unless otherwise noted.