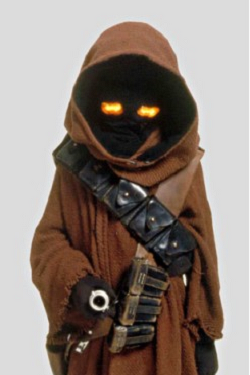 Jawas are a sentient species.

Jawas are the short-heighted natives of Tatooine. Like the Sand People, they are the descendants of the ancient Kumumgah species, but unlike their closer cousins they maintain a passive behavior, and accept the colonization of their planet, seeing it as a great business opportunity. Jawas are known for being astute merchants, and can often be seen moving around the planet on their characteristic sandcrawlers in order to scavenge resources and equipment, which will later be sold or traded.

In Star Wars: The Old Republic[]

Jawas appear on Tatooine in the game. One Jawa is a companion character named Blizz. There are also supposedly Force Sensitive Jawas encountered near Mos Ila.