"The Jedi Consular trains primarily in the ways of the Force. Consulars can subdue their targets using telekinetic powers and lightsabers alike
Primary Attribute: Willpower. Willpower increases the damage and critical chances of the Consular’s Melee and Force powers. This remains so for the Shadow, while the Sage’s Willpower increases Force damage and healing powers instead
Advanced Classes (Available at level 10): Jedi Sage and Jedi Shadow
Jedi Sage (Damage, Healing): Sages keep their targets at a distance, utilizing telekinetic Force abilities like Project, Telekinetic Throw and Force Stun. A Sage is also fluent in the arts of healing through the Force and can provide a powerful support role as healers when trained as a Seer
Jedi Shadow (Damage, Defense): Shadows are infiltrators and Jedi intelligence gatherers. Trained with stealth and double-bladed lightsabers, a Shadow tackles conflict with subtlety and a mix of decisive martial arts and the Force. Shadows specializing in Kinetic Combat can leverage the defensive strengths of a double-bladed lightsaber and the Force to guard allies and bolster defenses."
―In-game Codex (Game Rules)[src]

For more than 20,000 years, the Jedi Order has worked to promote peace and balance in the Galactic Republic, but each new day brings with it a new threat, promising to rip the Jedi and the entire galaxy apart. If the Republic is to survive, it needs leaders and visionaries; it needs the Jedi Consular.

Jedi Consulars channel the power of the Force for strength in combat and wisdom in diplomacy. Years of arduous training and meditation have sharpened Consulars’ minds to cut to the truth as cleanly as their Lightsabers cut through their foes. Whether unlocking long forgotten mysteries of the Jedi, raising armies to fight for the Republic or engaging in mortal combat with Dark Lords of the Sith, the Consulars’ deep attunement to the Force gives them all the power they need to rise to the occasion with poise and balance.

Intimate atonement with the deepest Force mysteries gives Jedi Consulars the insight and empathy to deftly handle charged conflicts that confound even the most cunning Senators and governors—but Consulars know when it’s time to talk and when it’s time to fight. When negotiations turn aggressive, Consulars demonstrate their gifts of foresight—anticipating and deflecting enemy attacks with fluid strikes from their Lightsaber.

Facing the Darkness Within

Jedi Consulars always seek to grow their knowledge of the galaxy, in understanding of themselves, and in comprehension of the Force that binds it all together. The commitment to this pursuit gives Consulars an unrivaled capacity for clarity in situations otherwise shrouded in darkness. However, this same dedication can also prove to be extremely perilous—inviting Consulars to explore paths that are better left untraveled. Some of the Jedi Order’s greatest minds have been seduced to the dark side through purely academic inquiries. The Consular knows the pain of this temptation as a battle-hardened warrior knows the throbbing of an old wound.

Before they can dispel the darkness in the galaxy, Jedi Consulars know they must first come to terms with the darkness within. There’s no avoiding the temptation to take shortcuts or even to use their knowledge for personal power; Consulars must constantly check their own motives. When tempted to step onto the path leading to darkness, Consulars must remember the tormented fate of the Jedi who have passed that way before. This is the only way they can unite the Jedi Order and the Republic and rally the troops to rescue the galaxy from the menacing darkness.

In a more peaceful age, Jedi Consulars may have humbly dedicated their lives to service as keepers of Jedi lore or as ambassadors in service to the Republic—tasks for which Consulars are uniquely qualified. However, as the shadow of the Empire has spread further across the galaxy, Consulars have stepped up to face the darkness on the front lines of battle as often as they've faced it when exploring the mysteries of the Force.

Preferring to stay as nimble on the battlefield as they are in negotiations, Jedi Consulars avoid the heavy battle armor worn by many Jedi Knights, Dense polymers and Cortosis armors would weigh them down; light cloaks and ornamented robes suit their strengths better, and the efforts they most often find themselves engaged in. No matter where they go, however, Consulars are never without the Lightsaber that marks their initiation into the Jedi Order.

The Consular's powers go far beyond meditation and mediation, and nothing illustrates this as vividly as their graceful movements in battle. Whether beset by an army of assassin droids or caught in the middle of soured negotiations, the Jedi Consular fights with an open conduit for the Force; manipulating massive forces to disable or even destroy their enemies.

The dual-bladed Lightsaber preferred by many Consulars requires a skilled approach to dueling. Wielding this weapon, Jedi Consulars will draw upon the Force to sense their opponents’ locations and strike them all down with precision. The Jedi Consular doesn’t just detect disturbances in the Force—sometimes they create them. This powerful ability allows the Consular to project a wall of pure Force energy into their opponents. The Jedi Consular has a preternatural understanding of how the Force connects all things, and they draw on this knowledge to toss enemies of all sizes into the air, before hurling them to the ground.

"A true Force prodigy, Jedi Master <name> has stood as a beacon of hope in the war against the Sith Empire, earning the title BARSEN'THOR: Warden of the Jedi Order. Uniting the Republic's most contentious worlds, <name> exposed and defeated deadly Sith infiltrators hidden deep within the ranks of both the Jedi and the military. But now a new enemy threatens to destroy both Republic and Empire, forcing <name> into an even more dangerous alliance in the desperate hope of saving the galaxy...."
―In-game Codex (Persons of Note)[src]

These species are available to play as a Jedi Consular:

Note: Any other legacy species unlocked would also be playable as a Jedi Consular.

The Jedi Consulars are very powerful in the Force. Focusing on Telekinesis, they channel the Force for power and wisdom. They can also specialize in lightsaber combat as a Jedi Shadow.

The resource bar for a Consular is Force. The consular starts with 100 Force, but this does not increase as the consular's level increases; however, some abilities that the Jedi Consular can learn will increase the amount of Force or the regeneration rate.

Consulars are also outstanding warriors, trained to use single- or double-bladed lightsabers, depending on their advanced class. They not only have offensive capabilities, but defensive abilities as well. These options allow the Consular to be a utility class or to fill a main role in a party, including DPS, Crowd Control, Healing, and even Tanking.

Jedi Consulars fight with amazing serenity. In contrast to Jedi Knights, who draw on the Force mainly to enhance their lightsaber strikes, Consulars frequently use the Force directly in combat. They can use Force energy to blast their opponents away from them or to slowly drain an opponent's health, to heal themselves and allies or to shield themselves from damage. Consulars also use the terrain to a huge advantage, often using telekinetic abilities to throw rocks and other objects at their foe, causing large amounts of damage.

Main article: Jedi Sage
The Jedi Sage wields a single-bladed lightsaber, has powerful telekinetics/healing, and is a ranged controller with damage or healing powers. As a Sage, you can effectively cast on the enemy, stunning and damaging, and keep your allies' health up at the same time.

The Jedi Shadow wields a double-bladed lightsaber, possesses stealth skills, as well as sustained damage and burst melee damage abilities. They can also tank with one of their specialization trees. A Shadow uses melee skills for great damage, and defense for great survivability.

Both the Jedi Consular and Jedi Knight classes make use of the Corellian Defender-class Light Corvette, suitable for both aggressive action and more placid negotiations.

Developed at the height of the The Great War , the defender was custom-built for the Jedi Order . The Jedi Council commissioned the starship after determining Republic Military vessels were not well-suited to the Jedi's more specialized missions. The Defender's exterior design bases itself on the consumer model corvette, but it has been outfitted with countless customized upgrades.

Loose, light-weight clothing is the preferred style for Jedi Consulars, enabling them to remain agile in battle.[3] At times, ornate robes may help accomplish missions of negotiation and diplomacy;[4] however, a Consular's prime interest is the mission, which means that apparel may need to be improvised from available materials.[5]

Preferring to stay as nimble on the battlefield as they are in negotiations, Jedi Consulars avoid the heavy battle armor worn by many Jedi Knights , Dense polymers and Cortosis armors would weigh them down; light cloaks and ornamented robes suit their strengths better, and the efforts they most often find themselves engaged in. No matter where they go, however, Consulars are never without the Lightsaber that marks their initiation into the Jedi Order. 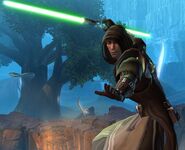 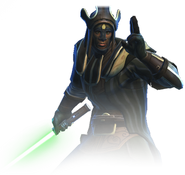 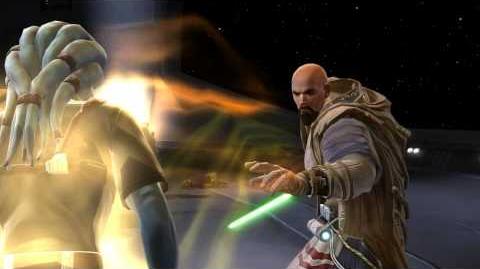 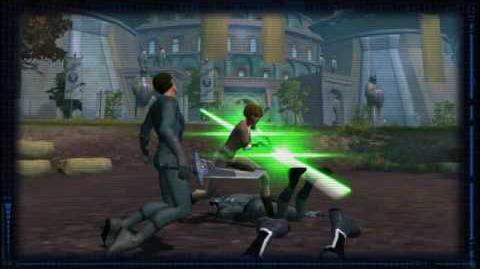 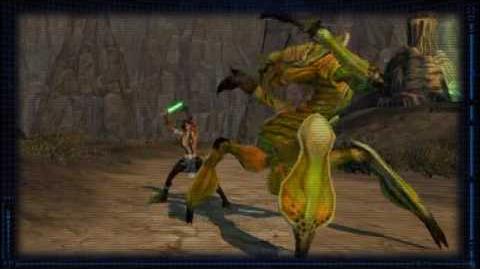 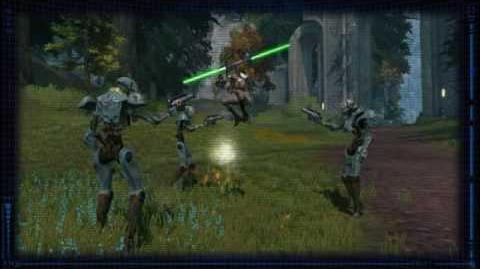 Retrieved from "https://swtor.fandom.com/wiki/Jedi_Consular_(playable_class)?oldid=116449"
Community content is available under CC-BY-SA unless otherwise noted.