"Control and focus are the hallmarks of the Jedi Sentinel. Through years of training, Sentinels learn the art of using two lightsabers in tandem to create an intricate web of damage almost impossible to evade. By manipulating the Force, Sentinels can see holes in the enemy's defense, potential flaws in their own techniques and how best to plan for both. All Jedi Sentinels can wield two lightsabers in combat, using speed and precision to strike enemies where they are weakest. Sentinels can opt to learn the ways of a Watchman, becoming a peerless lightsaber combatant and using the Juyo form to debilitate foes; Combat, taking advantage of the Sentinel's lighter armor and using the agile Ataru form to perform incredibly swift strikes; and Focus, specializing in advanced Force techniques to increase the potency of lightsaber attacks and perform telekinetic feats to hamper opponents."
―In-game Codex (Game Rules)[src]

The Jedi Sentinel is one of two advanced class of the Jedi Knight; the other is the Jedi Guardian.

Before the Jedi Purge, there were three Jedi Classes, one of which was the Jedi Sentinel along with the Jedi Guardian and Consular. The Jedi Sentinel deals damage primarily through lightsaber strikes, though it does possess several Force powers, most noticeably the iconic Jedi Knight Force leap.

They are the Jedi counterpart of the Sith Marauder.

As with all classes, you will have the option to choose an advanced class after you leave Tython and join with the fleet. Selecting the Sentinel class will lock your character into this advanced Jedi Knight class for the rest of the game. The Sentinel class fulfills the role of damage and damage only. The Sentinel wears medium armor and can be easily spotted by their distinctive dual lightsabers. The most important stats for a Sentinel are strength and endurance. In addition to the basic focus ability used by both the Sentinel and the Guardian, the Sentinel gains an additional ability called Centering. Centering is built in a number of ways and augmented by skills in each of the tress. At 30 stacks of Centering, additional skills are opened that consume the 30 stacks and provide powerful passive effects.

The two Sentinel skill trees are Watchman and Combat. The shared Sentinel and Guardian skill tree is Focus. 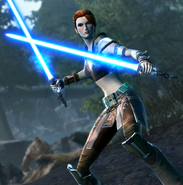 Add a photo to this gallery
Retrieved from "https://swtor.fandom.com/wiki/Jedi_Sentinel_(advanced_class)?oldid=116455"
Community content is available under CC-BY-SA unless otherwise noted.