"The original inhabitants of Alderaan, the insectoid Killiks spread across the planet and throughout neighboring star systems millennia before the foundation of the Republic. By the time human colonists found Alderaan, however, the Killiks had long since migrated into deep space for reasons unknown; the only evidence of their existence was their empty hive mounds. In fact, a few Killiks had remained behind on Alderaan and lived in hibernation deep underground. Every few hundred years, these Killiks would emerge and come into conflict with the colonists before retreating and sleeping once again. The Alderaanians viewed the Killiks as monsters out of legend, and no one’s certain how the Killiks view the Alderaanians. Killik society is comprised of a collection of hive minds–some violently territorial, others gentle and reclusive. Individual Killiks possess no sense of identity or self, and each would unquestioningly sacrifice its life for the benefit of its nest. As a result, Killiks cannot comprehend the value other species place on individuals, making them difficult to interact or negotiate with. They do, however, have values of their own, creating beautiful works of art and engaging in complex ritual behavior. The strength of the Killik hive mind is such that it can even absorb individuals from other species, altering their brain chemistry so that they respond to the will of the nest. These transformed individuals are commonly called Joiners."
―In-game Codex (Species)[src]

Killiks are a race of insectoid humanoids native to the planet Alderaan. They can often be seen in small or large groups. Every few hundred years, the would emerge from hibernation and spread out across the planet. They have been known to take in individuals, altering their brain structure, known as Joiners, their eyes becoming completely black in the process. They communicate with each other either via some sort of hissing, or through telepathy, also present in the Joiners. The Killiks were even known to have skills in weaponry usage, as they were seen with Blaster rifles or Staffs. 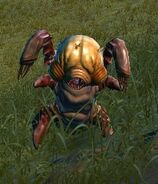 Adult Killik using a blaster rifle.
Add a photo to this gallery

Retrieved from "https://swtor.fandom.com/wiki/Killiks?oldid=110277"
Community content is available under CC-BY-SA unless otherwise noted.