"A cruel planet of rocky red deserts and crumbling ruins, Korriban was the homeworld of the ancient Sith. Reclaimed by the Empire in recent decades, it is now the site of the Sith Academy, where the Dark Council oversees the training of new acolytes. Only Sith may come and go freely from the academy, and for a non-Sith to visit Korriban is a great privilege. Surrounding the academy are the tombs of the first Dark Lords. Used as testing grounds by the academy overseers, the tombs remain filled with traps, monstrosities and relics, even millennia after their construction-along with the bodies of a generation of failed acolytes."
―In-game Codex (Planets)[src]

Korriban, originally known as Pesegam, is the sole planet in the Horuset system, located in the Outer Rim. It was the original homeworld of the Sith Purebloods and a sacred planet for the Sith Order, housing the tombs of many ancient and powerful Dark Lords of the Sith, and containing immense Dark side power and maybe, a few light side secrets. It was tightly controlled by the Sith Empire during the Cold War, and all intruders had to be completely scanned before being allowed entry.

Korriban is the starting planet for the Sith Warrior and Sith Inquisitor classes.

The Sith race lived on the red, dusty planet of Korriban, determined to grow strong despite the inhospitable climate. Their success culminated in a bold civilization, made stronger when a group of Dark Jedi arrived and interbred with the Sith after being driven out of the early Jedi Order. This ancient Sith civilization eventually became a superpower and challenged the Galactic Republic during the Great Hyperspace War. Their defeat drove a handful of survivors into deep space where they regrouped and rebuilt, determined to return.

Over time, the new Sith Empire found its way back to Korriban, until a visit a few centuries ago by two Jedi returning from the Mandalorian Wars. Turned to the Dark Side, the two Jedi, Revan and Malak, attempted to reclaim the Sith’s legacy in the known galaxy, but turned on each other and self-destructed.

The Sith Empire, is governed by a thousand-year-old dark emperor, wisely waited and returned to the known galaxy only when completely prepared to defeat the Jedi and the republic.

Retaking the holy planet of Korriban as a top priority, the Sith re-established the glorious Sith Academy and began training a new generation of Sith to inherit their dark legacy and seize their birthright as the true rulers of the galaxy. 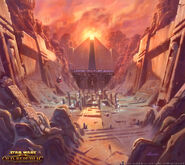 Retrieved from "https://swtor.fandom.com/wiki/Korriban?oldid=117643"
Community content is available under CC-BY-SA unless otherwise noted.