Loun is a female Sith Pureblood Assistant overseer serving the Sith Academy on the planet Korriban during the Cold War between the Sith Empire and the Galactic Republic.

As an Assistant overseer on the planet Korriban Loun standed near the Sith Academy, directing acolytes to their mentors. During the Cold War she met the future Emperor's wrath and told him/her that their personal overseers aren't capable of teaching the trainees all there is, revealing there are more suitable individuals for the job. After directing the warrior to Rance, they later parted. 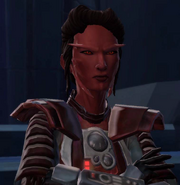 Retrieved from "https://swtor.fandom.com/wiki/Loun?oldid=113186"
Community content is available under CC-BY-SA unless otherwise noted.