"Adopted homeworld of the notorious Hutt Cartel, Hutta is a planet of semi-toxic swampland broken up by industrial facilities and urban centers. Hutt-aligned gangs control the civilized regions, forever warring over territory and resources. In the swamps, the native Evocii struggle against their Hutt rulers with limited success. The Hutts are officially neutral in the conflict between Empire and Republic, and welcome visitors. Pirates, slavers and spice dealers are all common sights in Hutt palaces, while corporations often establish themselves on Hutta's moon, Nar Shaddaa. Newly arriving shuttles on Hutta are directed to the town of Jiguuna."
―In-game Codex (Planets)[src]

Nal Hutta (Glorious Jewel in Huttese), simply known as Hutta, formerly known as Evocar, is the capital of Hutt Space and is located in the Y'Toub system. Hutta is the starting planet for Bounty Hunter and Imperial Agent characters.

In Huttese, the name translates into "Glorious Jewel", and the planet more commonly called Nal Hutta is considered a paradise to the gluttonous tastes of the Hutts. To anyone else, though, the planet is a living nightmare - a disgusting and dangerous place to visit, and an unthinkable place to live. Current Underworld slang has shortened the name to simply "Hutta" - a place where more civilized people threaten to send their children if they misbehave.

Before the creation of the Republic, Hutta was controlled by the native Evocii, a relatively primitive race who made the mistake of engaging in extensive business deals with the Hutts, ignoring rumors of their legendary greed. Centuries later, the Evocii realized their mistake too late—their entire civilization was mortgaged. When the Hutts’ home-world of Varl later became polluted and uninhabitable, the Hutts collected on the Evocii’s debts, becoming rulers of the planet and some of the surrounding systems.

In the thousands of years since, the Hutts have subjugated the Evocii—they live in slavery and squalor while the Hutts’ insatiable pursuit for wealth pollutes the planet. This pollution is evidenced in the large, metal shoring props that are essential in certain areas for pushing back the mud to create pathways. The result of this environmental approach is corroded metal walls with swamp muck oozing out from the cracks. The swamps themselves have suffered from heavy industrialization. A wide variety of modular pipes and refinery equipment create a patchwork throughout the planet, snaking through the corrosive muck as if the planet were held together by a network of metal and sludge.[1] Hutta has become a breeding ground for the powerful Hutt families who control competing crime cartels that operate across the galaxy. Though petty vendettas keep them in constant conflict with one another, the Hutts have remained neutral in the long-running war between the Republic and the Sith Empire, keeping their world exactly as they like it.

The Hutts are the lords of Hutta's demented society, and all other races, even official foreign emissaries, are seen as expendable fodder in the Hutts' bloated, wormlike eyes. Even the most infamous bounty hunters are hesitant to venture on the Hutts' home turf, and a sane person would never come to Hutta willingly without the most crucial need.

Prior to the Hutts' arrival, Hutta was known as Evocar by the native Evocii. It was a temperate planet characterized by lush rainforests, expansive oceans and towering mountain ranges. Natural resources were plentiful, a fact that no doubt attracted the Hutts as they searched for a new homeworld to settle. The Hutts’ occupation of Evocar led to centuries of strip-mining and unchecked consumption that forever altered Evocar, transforming the once-idyllic planet into a polluted, bog-infested wasteland.

Hutta was formerly known as Evocar and is the original home world of the Evocii, who were subjugated by the Hutts, who migrated from their original home world of Varl along with their servants the t'landa Til. It is often referred to simply as Hutta. While it remains neutral in the Cold War between the Galactic Republic and the Sith Empire, it is the starting world of the Empire's Bounty Hunter and Imperial Agent classes. It's so overindustrialized and polluted that non-natives barely last a day on this planet.

In Huttese, the name translates into “Glorious Jewel”, and the planet more commonly called Nal Hutta is considered a paradise to the gluttonous tastes of the Hutts. To anyone else, though, the planet is a living nightmare—a disgusting and dangerous place to visit, and an unthinkable place to live. Current Underworld slang has shortened the name to a simple ‘Hutta’—a place where more civilized people threaten to send their children if they misbehave.

Main article: Lore#Hutta
This lore can be found on Hutta.

Hutta World Map
Add a photo to this gallery 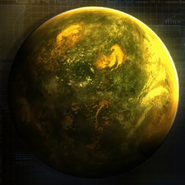 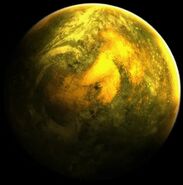 A Bounty Hunter stalks his prey in the muddy marshlands of Hutta.

A network of tubes on Hutta transports vile chemicals that will be dumped wherever is most convenient.

Hutta has become the breeding grounds for the powerful Hutt families who control competing crime cartels that operate across the galaxy.
Add a photo to this gallery


Cite error: <ref> tags exist, but no <references/> tag was found
Retrieved from "https://swtor.fandom.com/wiki/Nal_Hutta?oldid=115468"
Community content is available under CC-BY-SA unless otherwise noted.