"Around the time of the foundation of the Republic, a group of Duros explorers led by Chal Haan colonized the planet Neimoidia. Over millennia, the conditions of their new colony led these Duros to evolve into a separate species: Neimoidians. These green-skinned, red-eyed beings grow from grubs in communal hives, where they spend the early years of their lives competing for food. Those who cannot find or steal enough to eat quickly starve, a process which ensures that weakness is weeded out early. Personal greed is seen as acceptable and even desirable in Neimoidian culture, and while Neimoidians are known as capable entrepreneurs and administrators, their opponents paint them as deceitful, lazy cowards. Neimoidians do rely heavily on advanced droids for all but the most important tasks–freeing them to pursue elaborate political games for social rank or increased profits–but Neimoidian investors have also aided the Republic’s economy in hard times. The Senate therefore tolerates Neimoidian bribe-taking and backroom trading… up to a point."
―In-game Codex (Species)[src]

Neimoidians, also known as Neimoidian Duros, are a race of humanoids native to the planet Neimoidia. They are distant genetic relatives of the Duros. 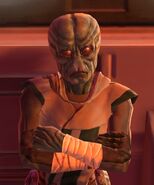 Neimoidian.
Add a photo to this gallery

Retrieved from "https://swtor.fandom.com/wiki/Neimoidians?oldid=108993"
Community content is available under CC-BY-SA unless otherwise noted.