"Native to the forests of the planet Cholganna, the feline nexu have become alpha predators throughout the galaxy over the past few centuries, adapting to new environments through a natural hardiness and a quick reproductive cycle. Packs of nexu have been found roaming the tundra of Mygeeto and the steaming jungles of Rodia, equally adept at stalking and killing prey. Nexu are recognized in many cultures as an icon of viciousness, and several Mandalorian clans have taken the creature as their symbol. Some xenobiologists argue that nexu are far less violent than common wisdom suggests, and that it's the activities of sentient beings that agitate the cats. Left alone, they're smart, capable and strong-but not cruel or aggressive."
―In-game Codex (Bestiary)[src]

"Nexu are vicious feline predators commonly used for arena battle. However, a patient handler can form a strong bond with their Nexu, training them to perform multiple tasks."
―Description[src]

Nexus are a race of predatory feline animals native to the planet Cholganna. There are other breeds of nexu on Cholganna's other continents, but only the forest nexu has an additional set of eyes able to view in infrared wavelength, which aids in their hunting of bark rats and tree-climbing octopi. They are often exported and trained as security beasts, and used for patrolling on Malastare, or used in arena combat, as seen on Geonosis. Nexu are 4.5 meters long and generally 1 meter tall.

The Nexu appear to be feline in nature, with claws which can slice a Human in half. They have spikes along their back, and a long tail that in the wild allows the Nexu to swing from tree branch to tree branch. They have extremely sharp instincts and reflexes, although they are known to tire easily, and often use swift movements to finish an enemy quickly, biting down and thrashing their head about to break their victim's neck. Cubs are born pure white. 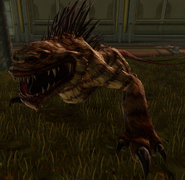 A Jedi strikes down a Nexu.
Add a photo to this gallery

Retrieved from "https://swtor.fandom.com/wiki/Nexus?oldid=110282"
Community content is available under CC-BY-SA unless otherwise noted.