Nimi is a male mirialan Jedi Master serving the Jedi Order during the Cold War between the Galactic Republic and the Sith Empire.

As a Force-sensitive Mirialan, Nimi was trained in the ways of the Jedi and eventually earned the rank of Jedi Master. During the Cold War he was stationed on the Republic Fleet over Tython. He met another Jedi Knight and told him/her that he/she should choose another path; that of the Jedi Guardian and the Jedi Sentinel. 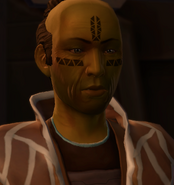 Retrieved from "https://swtor.fandom.com/wiki/Nimi?oldid=113216"
Community content is available under CC-BY-SA unless otherwise noted.