"The secret society known as the Order of Revan is known only to its members and a few inquisitive outsiders. The society is believed to be several hundred strong, ranging from powerful and influential Sith Lords to military officers and alien slaves–low status is no barrier to entry, but personal power and fervor are everything. Some so-called Revanites devote their lives to the cult’s teachings and exist outside of mainstream Imperial society; others study and meet in secret while maintaining ordinary lives. The Order of Revan takes its name from an ancient Sith Lord–a fallen Jedi who used both the dark side and the light side of the Force during his lifetime. Revan drew strength from passion, as well as tranquility; took allies who were human and alien, weak and strong. Revanites seek to emulate Revan’s ways, seeing him as the greatest of all teachers."
―In-game Codex (Organizations)[src]

The Order of Revan, whose members are often referred to as Revanites, is a galactic cult consisting of thousand of followers loyal to the ideals and teachings of Revan, both from his actions as a Jedi and a Sith Lord.

Beings from across the galaxy have been following Revan's teachings since after the destruction of the Star Forge, but did not become a unified body until after his capture and imprisonment at the Maelstrom Prison facility. Loose groups formed a camp on Dromund Kaas, believing that much of what they knew came from the influence Revan gave as a Sith rather than a Jedi.

After the Cold War, the Order became more of a unified body under the leadership of Revan himself, having been released from Imperial capture and winning a major victory from his past at The Foundry. Revan called upon more and more beings from inside the Galactic Republic and Sith Empire, and soon millions of people from within both militaries secretly defected to the Order. Neither the Republic nor Empire discovered the deception until too late, even after having dismantled several Revanite operations on Manaan and Lehon.

Revanites within Republic and Imperial ranks broke away and regrouped on Rishi and waited for orders from Revan concerning an attack on the two major factions. It is unclear as to whether one of the two groups of Revanites decided to deceive their Order allies and rejoin their former militaries, but a complete list of all Order defectors was discovered by Theron Shan and transmitted to Satele Shan and Darth Marr, allowing them to capture the defectors in their own fleets.

The remnants of the Order retreated and made one final standoff on Yavin 4, but in the end were unable to stop both the Republic and Empire's combined might. 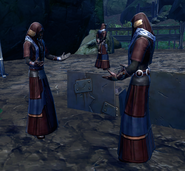 Rian Darok and Darth Arkous were running the order, answering only to Revan himself.
Add a photo to this gallery

Retrieved from "https://swtor.fandom.com/wiki/Order_of_Revan?oldid=116157"
Community content is available under CC-BY-SA unless otherwise noted.