"Centuries ago, the popular shadowport now known as Port Nowhere was called the Potentate's Pride, a Hutt Azalus-class dreadnought owned by the Cartel's onetime Sumpreme Mogul, Barabbula. For reasons that remain unknown, Barabbula unexpectedly sold the Potentate's Pride at a steep discount to enterprising Duros starship mechanic Delcan Finyaft. Six years of retrofitting later, Delcan unveiled the most impressive free-trading spaceport in the galaxy and opened Port Nowhere for business. it has had a succession of owners since it's founding, but Port Nowhere has never lost it's spirit of independance or reputation as a refuge for outlaws of all types. Much of Port Nowhere's success comes from it's mobility. Although operating as a space station, Port Nowhere possesses functioning sublight engines and a hyperdrive. It travels a variable route through neutral sectors, passing through Hutt Space, the Outer Rim, and the Core Worlds in a repeating cycle. Every time it arrives at new coordinates, Port Nowhere broadcasts the new location on a special member's only coded holofrequency. Thrifty spacers seeking to conserve on fuel costs have been known to "piggyback" on Port Nowhere during it's travels, allowing business to come to them."
―Excrept from Star Wars The Old Republic Encyclopedia[src]

Port Nowhere, formerly known as the Potentate's Pride, was a mobile spaceport used by the Underworld during the Cold War and Second Great Galactic War.

Port Nowhere is a heavily modified Azalus-class dreadnought, formerly named the Potentate's Pride. Owned initially by Barabbula the Hutt, it was purchased by a Duros ship mechanic named Delcan Finyaft without the Hutt's knowledge. Finyaft spent the next six years deconstructing and retrofitting the station and reopened it to the underworld, advertised as Port Nowhere and described as a "floating cantina." The spaceport is a haven for pirates, smugglers and other criminals; it's location shifts from time to time as the mobile space port travels though the Core Worlds, Outer Rim and Hutt Space. The station, while it houses individuals and starships of several underworld organizations, swears alligience to no faction to maintain it's neutrality. After defeating the Voidwolf, the Smuggler turned crime lord calling himself the Voidhound began using Port Nowhere as a base of operations, controlling his new criminal empire from the station. SIS field agent Theron Shan made a stop at Port Nowhere during the Second Great Galactic War to obtain clearance codes and navigation charts for Imperial space and in the process knocked out a spaceport security officer.

"Originally an Azalus-class Hutt dreadnought, Port Nowhere was transformed into a mobile space station catering to less-than-legitimate business. It rapidly became a favorite destination for smugglers, black market merchants and other outlaws. Of all the galaxy's seedy spaceports, only Port Nowhere offered true freedom. For years, Port Nowhere traveled between Hutt Space, the Outer Rim and the Core Worlds. It stopped in neutral sectors and broadcasted its coordinates on coded HoloNet frequencies. Criminals converged on the station and conducted business before it jumped back to hyperspace, always remaining one step ahead of the law. Recently, however, Port Nowhere suffered a major hyperdrive malfunction that left it stranded. When or whether the station shall resume its former mobility remaines a mystery."
―In-game Codex (Locations)[src] 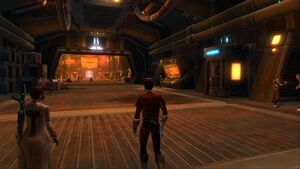 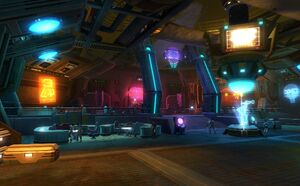 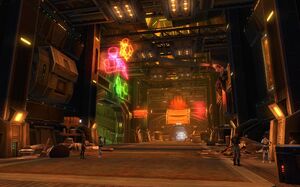 Retrieved from "https://swtor.fandom.com/wiki/Port_Nowhere?oldid=106923"
Community content is available under CC-BY-SA unless otherwise noted.