"A Powertech wears heavy armor like a second skin and never balks at field-testing new technology if it means greater protection and upgraded safeguards. The best in shielding, defensive tactics and high-powered flamethrowers combine to make the Powertech an impenetrable one-man blockade, getting up close and personal to enemies. All Powertechs learn to use personal shield generators and can opt to acquire the skills of a Pyrotech, using flamethrower attacks and other abilities that do damage at short range and prevent an enemy from fleeing; apply Shield Tech, using a variety of devices to survive any attack and draw enemy fire; and access Advanced Prototypes including fiery missiles and darts to reduce an enemy’s survivability and regenerative capacity."
―In-game Codex (Game Rules)[src]

The Powertech is one of the two advanced class of the Bounty hunter; the other is the Mercenary.

It is the "tanking" AC for Bounty Hunters, and focuses heavily on the use of Gadgets, Energy Shields, and the Flamethrower. Although Powertech has a lot of ranged abilities, all 3 Powertech specs require Melee range to achieve maximum potential.

A Powertech wears heavy plating body armor like a second skin and never balks at taking on the newest prototype technology if it means greater protection and upgraded safeguards. The best in armor shielding, smart defensive tactics and high-powered flamethrowers combine to make the Powertech an impenetrable one-man blockade, from which few enemies escape unscathed. In a group, Powertechs are vital, so if you are a healer class, keep your Powertech healthy.

Both Shield Tech and Advanced Prototype become very "heat efficient" as you gain levels/talents, allowing you to deal a lot of damage without a risk of overheating.

They are the Sith Empire counterpart of the Scoundrel.

The following entries are the Powertech skill disciplines

Main article: Shield Tech
Launching into the fray with a jetpack-propelled attack and able to withstand powerful offenses, the Powertech trained in the Shield Tech specification takes the brunt of the assault while employing a wise range of tech-based attacks to scorch and trip up even the most formidable adversaries.

Main article: Advanced Prototype
When stalking dangerous prey, a selection of powerful, high-tech armaments can be a hunter's best friend. The Advanced Prototype Powertech's thermal detonators, gauntlet blades and magnetized bracers devastate their intended target while ensuring the Powertech remains on the edge of any engagement.

Main article: Pyrotech
Need a light? The Pyrotech-style Powertech adds fuel to any firefight with an abundance of vivid, searing flame attacks. From fistfuls of fire to missiles loaded with highly combustible compounds, the Pyrotech's arsenal allows them to never back down while making sure their enemy burns out in a blaze of destruction.

The following utilities are available to all Powertech disciplines. The player earns utility points that may be invested in the tiers upon reaching levels 11, 19, 27, 35, 43, 51, and 60. There are 7 utility points as of patch 3.0. The utilities are divided into three tiers: Skillful, Masterful, and Heroic. 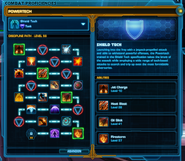 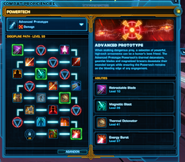 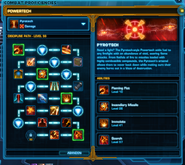