"Ten thousand years before the formation of the Republic, the Rakata ruled much of the known galaxy. War-like and cruel, strong in the Force and technologically advanced, they enslaved or wiped out every civilization they encountered. At its peak, nearly five hundred conquered worlds paid tribute to the Rakata Infinite Empire. However, the Rakata’s rapid expansion came to an abrupt end when a strange plague swept through the species. Millions died, and most of those who survived lost their connection to the Force. Suddenly vulnerable, the Rakata were unable to suppress a massive outbreak of violent slave uprisings. The liberated worlds destroyed the creations and records of their defeated overlords, wiping out almost all trace and knowledge of the Rakata in the greater galaxy. A few thousand Rakata survivors–all that remained of the Infinite Empire–retreated to their hidden homeworld of Lehon, where they descended into barbarism."
―In-game Codex (Species)[src]

The Rakata, also known as the Builders, are a race of amphibian humanoids native to the planet Lehon in the Unknown Regions. Once the rulers of the legendary Infinite Empire, they are now a primitive and obscure race.

The Rakata used to be a scientifically advanced race that developed early in galactic history. They developed many advanced technologies, such as early hyperdrive technology, through the use of the Dark side of the Force. As a result, Rakatan starships could only travel to planets strong in the Force. Long term use of the Dark Side of the Force eventually corrupted their society and turned them into a race of merciless warriors. The Rakata used their potent Force-powered technologies to conquer and enslave every species they came across throughout the known galaxy, ruling over their Infinite Empire. They also constructed a large space station and factory known as the Star Forge in orbit of Rakata Prime's star. The Star Forge utilized the star for energy and raw materials, constructing seemingly infinite amounts of droids and starships.

However, the Sith species on Korriban, under King Adas, rose up against the Rakata and drove them from their homeworld. Eventually, other slaves began to rise up and the Rakata were driven back to their homeworld in the Unknown Regions. The Rakata were then suddenly struck by a deadly plague that spread rapidly through their ranks. The plague killed many Rakata and the survivors found they had lost their connection to the Force. The Rakata could no longer use the Star Forge and the rest of their technology and Rakatan civilization rapidly faded into obscurity and barbarism. Warlords devastated the surface of the planet with weapons of mass destruction and warfare, forcing the majority of the Rakata to flee underground.

The Rakata were eventually rediscovered by the Sith Emperor and the True Sith Empire. The Emperor passed this knowledge onto Darth Revan, and his apprentice Darth Malak, after the Mandalorian Wars, so they could utilize the Star Forge in their invasion of the Republic. The majority of Rakata Prime at that time was controlled by two rival Rakata tribes: the warriors of The One and the priests of the Elders. Revan tricked the Elders into giving him access to the Temple of the Ancients, which was actually the controls to a massive disruptor shield protecting the Star Forge. Revan lowered the shield and gained access to the Star Forge, using it to fuel his war machine during the Jedi Civil War. However, towards the end of the war, Revan was redeemed and aided the Jedi in destroying the Star Forge to end the war once-and-for all. 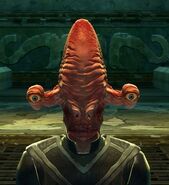 Retrieved from "https://swtor.fandom.com/wiki/Rakata?oldid=118167"
Community content is available under CC-BY-SA unless otherwise noted.