The Republic Transport is a type of transport ship used by the Republic Military during the Cold War.

The Republic Transport had a large hangar bay on either side. These vessels saw action on the Planet Alderaan, they were also used on the moon Oricon, on which, one of the transports crashed. The most notable of these vessels is the Vanguard the official transport of the Repblic Army's 453rd Battalion, which is famed for taking on a Terminus-class destroyer during a military insertion. 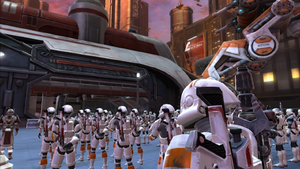 Republic Army Troopers get ready to enter a Republic Transport.
Add a photo to this gallery
Retrieved from "https://swtor.fandom.com/wiki/Republic_Transport?oldid=109448"
Community content is available under CC-BY-SA unless otherwise noted.