"Troopers are the Republic's finest soldiers, well-equipped and trained for battle, engaging in ground fights with heavy blaster rifles and a versatile array of ammunition
Primary Attribute: Aim. Aim increases the damage and critical chances of the Trooper's Ranged and Tech powers. This remains so for both the Commando and the Vanguard Advanced Classes, while the Commando's Aim additionally increases the effectiveness of healing powers. Advanced Classes (Available at level 10): Commando and Vanguard
Commando (Damage, Healing): Commandos blast down their targets from a distance, attacking with abilities like Explosive Round, Full Auto and Sticky Grenade. Commandos carry destructive assault cannons, but they can also support their squad as healers if trained as a Combat Medic
Vanguard (Damage, Defense): Vanguards are the Republic's frontline. Vanguards can draw targets in with a Harpoon and devastate groups of enemies at close range with a Pulse Cannon and a variety of Surges. Vanguards can train for inclement conditions and wear the finest armor, making them durable defensive soldiers when deployed as Shield Specialists."
―In-game Codex (Game Rules)[src]

The Republic trooper is one of the four Galactic Republic-aligned playable classes. They start on the planet of Ord Mantell. Famous Republic troopers include Harron Tavus and Jace Malcom.

Honor, Duty, Defense of the Republic

Not all heroes carry Lightsabers. Some just have the will to fight.

For decades, the armed forces of the Galactic Republic defended their civilization against the seemingly unstoppable Sith Empire. Despite countless setbacks, the men and women of the Republic military never backed down until the Senate ordered them to do so. These brave souls remain ready and willing to lay their lives on the line today.

In the wake of the Treaty of Coruscant, the Republic military has begun recruiting from within its own ranks, creating cutting-edge Special Forces squads for the inevitable day when the war with the Sith Empire begins anew. These advanced strike teams are comprised of only the most talented and disciplined soldiers - a new breed of elite Republic troopers.

These republic troopers are the embodiment of the Republic military's highest aspirations - the most advanced fighting force in the galaxy. They are equipped to face any foe in any environment, but it's not their gear that makes them tough - it's their guts. The trooper' greatest weapons are their indomitable spirit, their unwavering sense of duty and their undying loyalty to each other and to the ideals that the Republic represents. In this age, the stakes have never been higher. The Republic must win or face extinction. The fate of the galaxy rests upon ordinary men becoming extraordinary heroes. This is the path of the Republic trooper.

Relations with the Jedi

The Knights of the Jedi Order have defended the Republic for generations, but they have not fought alone. A host of unsung heroes have marched at the Jedi's side - common men courageous enough to enlist and face the same risks as their Jedi comrades despite not having access to the Jedi powers of protection. These heroes have not gone unappreciated by the Jedi. The men and women of the Republic military are accorded complete respect and admiration by the Order and by the Republic's political leaders.

In the years since the Treaty of Coruscant, the Jedi have withdrawn in significant numbers to their homeworld of Tython. Their presence in the Republic military, though still significant, is not what it was during the war. In many ways, the Republic's newly-trained elite troopers have stepped up to take charge of the Republic's defenses. When troopers are partnered with the Jedi, they are a force to be reckoned with on any battlefield.

Deployed to the hairiest battlefields in the galaxy, republic troopers generally travel in small, specialized squads. However, it is not uncommon, to see a republic trooper engaging enemies on his or her own. Whether operating solo or in groups, members of the Republic Special Forces have become intimidating opponents to their enemies.

The Republic's experiments with a new generation of heavy blaster rifles have proven successful, sparking a galaxy-wide trend towards larger, more powerful and more versatile armaments. It takes a great deal of strength and training, however, to wield these war machines, so they're rarely used outside the military. Republic engineers have also worked overtime fashioning new defensive gear for the Republic's most elite soldiers, armor suits that provide maximum protection and flexibility in multiple environments.

Whether fighting as part of a small strike squad or at the forefront of a larger force, the republic trooper can unleash unrivaled firepower against his enemies. A republic trooper's rifle is his best friend, and the military is constantly challenged to design faster, more powerful and more reliable blaster rifles every year. Wielding such rifles and wearing protective battle armor designed by the Republic's top engineers, the republic trooper will not hesitate to step right into the crossfire. Whether storming a base or a battlefield, the Republic trooper charges into the fight, blaster-rifle blazing, to clear a path for freedom and justice.

Though the republic trooper's tactical strengths tend to rely on ranged technology and superior firepower, standard training involves lengthy exercises in close-quarters combat. A slam to the face from a cortosis-reinforced rifle stock is a very effective melee maneuver.

In addition to the arsenal of attacks available to the republic trooper using his rifle, standard trooper equipment often includes a number of sticky grenades. Nearly impossible to remove, these explosives unerringly dispose of the target and anyone standing nearby. Taking full advantage of the modern rifle's versatile attachments, the republic trooper can launch a high-powered grenade that explodes on impact, incapacitating a single target.

"Sole survivor of brutal treason, highly trained soldier <name> rose to take command of the Republic's most elite Special Forces unit: Havoc Squad. When war with the Sith Empire broke out in earnest, <name> conducted critical operations to break the enemy advance, culminating in the defeat of the Empire's greatest general. But changing circumstances have led Havoc Squad's commander to join with former adversaries to defeat a new enemy that threatens to destroy them all...."
―In-game Codex (Persons of Note)[src]

These species are available to the Trooper:

Main article: Commando
Commando republic trooper are the warriors of the battlefield and focus more on offense than defense, using brute force to overwhelm enemies. Commandos are able to take out a vast number of enemies with heavy concussive blasts from their Assault Cannons.

Main article: Vanguard
Vanguards go out on the battlefield with heavy armor, able to charge through extreme blaster fire and hostile environments. Their aggressive frontal assault tactics make it hard for most enemies to predict what their next attack is going to be or where it's coming from.

The republic trooper uses various heavy weapons ranging from laser rifles to two-handed heavy cannons. The troopers focus on heavy blaster rifles and a range of grenades and quick melee attacks. The resource for their abilities is Energy cells which recharges at a rate based off how much ammo is currently in your weapon (3/4 ammo recharges 75% speed, half =50% speed, etc) and can be quickly recharged with the ability Fast Reload. Your energy cells regenerate faster at higher energy levels. As your energy cells deplete, so does the rate at which they regenerate. To maintain a high level of energy cells, use Hammer Shot regularly to allow your energy cells to regenerate

The republic trooper can be specialized to deal substantial DPS (Damage Per Second), but can also serve as a group's primary tank[1] due to their armor and large amount of health. They can also act as main healers through the Commando's Combat Medic tree. 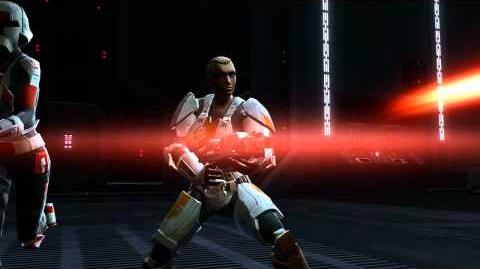 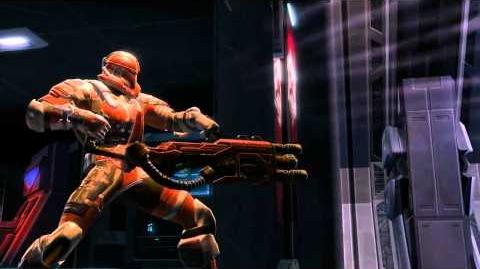 Retrieved from "https://swtor.fandom.com/wiki/Republic_trooper_(playable_class)?oldid=118787"
Community content is available under CC-BY-SA unless otherwise noted.