A role is the job that a character performs while in a group.

As is the case with most MMORPGs, Star Wars: The Old Republic has designed grouping and party play in part around the concept of character roles, where specific duties are fulfilled by specialized characters whose skill sets are appropriate for the job. In some situations companions can fulfill the role that would normally be occupied by a player.

Although there are many types of roles, there are three core roles in TOR which nearly always need to be in place for effective group play. They are:

In addition to these roles, other jobs may be performed in a party. While oftentimes not characterized as 'roles' in the typical sense, they nevertheless constitute distinct and important functions in group play, especially in large scale parties, like operations (aka raids):

A tank's role is two-fold. First, the tank is meant to be the party member attracting the attention of creatures and taking damage (typically by using a game mechanic that forces it to be targeted, known as threat at generation). Secondly, the tank is to meant to survive this damage, either through a large reserve of health, or by way of damage mitigation (specifically, by pure avoidance of damage, or by reduced impact of damage via high armor values).

The key game mechanic for Tanks rests in abilities that generate a high amounts of threat relative to the raw numerical damage that they produce. Tanks also often have taunt abilities which allow them to force a target to attack them, regardless of threat levels.

The healer's job is to heal and prevent damage. Most often, the healer will focus their effort on the Tank, who's job it is to attract and hold the attention of creatures (known as "holding aggro"). Healers will also lend aid to other party members who have taken damage whenever they are able, but will rarely do so if it means turning away from healing the tank for too long.

Healing generates threat, but oftentimes at a reduced rate in comparison to the raw numerical value of the healing that they do. The relationship between tank and healer threat generation is symbiotic: the greater the total health value and damage mitigation rate that a tank can produce, the less healing that a healer will need to provide to the tank, and therefore the less threat the healer will generate. On the other hand, when a tank does not have adequate health and damage mitigation, the healer will need to provide more healing to keep the tank alive, thereby raising his/her threat generation. At a certain point, these lines cross, and the healer will draw aggro away from the tank and on to himself/herself, the result of which is usually a quick death.

Classes which can fulfill the healer role are Sage Jedi Consular, Commando Trooper, Scoundrel Smuggler, Sorcerer Sith Inquisitor, Mercenary Bounty Hunter and Operative Imperial Agent. Like Tanks, each of these classes has a dedicated skill tree which supports healing duties.

At the introductory levels of the game, DPS role is relatively straightforward: remain focused on the tank's target, do the maximum amount of damage in the shortest amount of time, do not exceed the tank's threat level, and protect the healer at all times.

However, contrary to popular belief, good DPS play can actually be one of the most difficult things to master in high end play, especially in operations settings. In these environments, DPS play involves much more than raw damage output, and DPS players are expected to master multiple skills. These include avoiding all 'unnecessary' damage (especially Area of Effect damage), exerting proper Crowd Control (CC) practices (including setting up and not breaking CC), kiting creatures, use of interrupts, and many other subtle duties.

All classes and advanced classes can fill the DPS role

The leader serves also as the tactical commander. During combat, the leader will call out key information to the group and direct ad hoc adjustments. The leader is expected to have a complete understanding of the environment that the party is immersed in, especially in regards to combat (particularly boss fights).

The Off Tank is a niche role, occasionally needed in specific encounters where fight mechanics dictate the need for two (or more) tanks. Although the name may imply otherwise, the Off Tank may or may not in fact be the "better" of the two tanks (in regards to level, skill, gear, etc.). This is because specific fights may necessitate unique abilities that one tank is more suited offer than another, regardless of other factors.

Off Tanks are needed in primarily two scenarios. The first is one in which a boss fight requires that two tanks switch aggro back and forth between them (often done to avoid large amounts of damage over time). In such a fight, the role of 'off tank' is really more that of 'second tank'. The second scenario is one in which the primary tank maintains aggro on the boss, while the Off Tank is responsible for ensuring that all other creatures are kept away from other players.

In some large groups, particularly operations, there may occasionally be a need for a designated Support player. The Leader will often time designate a player in the Support role because of his/her unique class abilities which become more useful when used in large groups.

Support players will first and foremost ensure that their abilities are always 'up', meaning in effect as buffs on their allies or debuffs on their opponents. Once this state is achieved, the Support player will assist on extra duties, usually DPS or Healing. 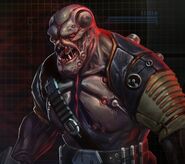 Companion character Khem Val can fulfill the role of tank.
Add a photo to this gallery
Retrieved from "https://swtor.fandom.com/wiki/Role?oldid=112339"
Community content is available under CC-BY-SA unless otherwise noted.