The Silencer was a superweapon built and used by the Sith Empire during the Cold War and Galactic War. The device forms part of the Sith Inquisitor Storyline.

Using the Sun Razer, The Sith Empire was able to complete the Silencer's creation in years instead of decades. All the projects fueled by the Sun Razer were overseen by Darth Mekhis and discovered by Theron Shan and Jedi Master Ngani Zho upon their infiltration and capture in the Vesla system.

By 10 ATC, during the Cold War, Darth Thanaton canceled the Silencer project, as he was a staunch believer of the superiority of the Force over any new technology. However, Moff Pyron contacted his rival, Lord Kallig about the Silencer and stated that using it could win valuable allies within the Imperial military. The last piece required was a CN-12 chip being held by a group of cyborgs called the Veil on Nar Shaddaa.

After acquiring the CN-12, Pyron managed to finish the Silencer megalaser and mounted it on the Imperial warship Doombringer. Kallig was then able to use the superweapon against a small Republic fleet, completely annihilating it. This had the effect of rallying Pyron and other Moffs to the Inquisitor's cause, which gave the rival Sith Lord the backing to seriously challenge Thanaton. Kallig also instructed Pyron to ensure that their allies got a Silencer for their own capital ships.

"Powerful fleet-destroying technology, the Silencer is a ship-mounted cannon designed to be fired over long ranges. The visible energy beam created by the Silencer is capable of obliterating capital ships, but more significant is the beam’s blossoming effect–a rippling wave of radiation cascading outward from the beam with range and destructive power sufficient to destroy an entire enemy armada. Dependent on a rare and costly new chip called the CN-12, the Silencer prototype originated under the aegis of the late Darth Mekhis. When Mekhis died, her half-completed technology was left to the military to develop further–but when it became clear that progress was slow, the powerful Sith Lord Darth Thanaton deemed the Silencer project too costly and out of line with the Empire’s goals to continue. Moff Pyron, the officer who was assigned to oversee the Silencer, saw potential that Darth Thanaton did not. Since then, he has ensured that the prototype’s continued development behind Thanaton’s back."
―In game codex[src]

"Moff Pyron rose to prominence in an Empire that was in flux. One of the youngest officers to achieve the title of Moff, Pyron felt it was his duty to fulfill his commitment as a soldier and not get involved in Sith affairs. He held fast to this policy, until Darth Thanaton canceled his pet superweapon project–the Silencer. Believing that Darth Thanaton’s motivations for canceling the Silencer project–an insistent reliance on Sith tradition and the use of the Force over new technology–were ultimately self-defeating, Moff Pyron decided it was time to seek alliances elsewhere among the Sith. He had come to realize that both his own advancement and that of the Empire depended on realigning one’s most deeply held principles."
―In game codex[src] 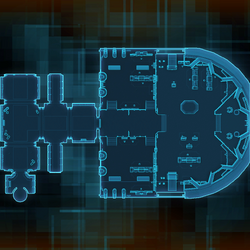 Add a photo to this gallery
Retrieved from "https://swtor.fandom.com/wiki/Silencer_(superweapon)?oldid=100359"
Community content is available under CC-BY-SA unless otherwise noted.