Silvarte is a male human Jedi Master serving the Jedi Order during the Cold War between the Galactic Republic and the Sith Empire.

As a Force-sensitive human, Silvarte was taken to learn the ways of the Jedi and later received the rank of Jedi Master. He then went to Tython to help the Galactic Republic and selected an apprentice - a young girl, called Moracen. He and master Yollo often sent their apprentices Moracen and Spanios to finish their trials together and soon after, they became suspicious and sent an unidentified Jedi Knight or Jedi Consular to see if they are really lovers. 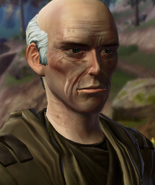 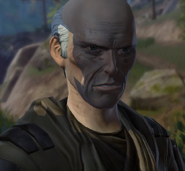 Retrieved from "https://swtor.fandom.com/wiki/Silvarte?oldid=110723"
Community content is available under CC-BY-SA unless otherwise noted.