"The Sith Inquisitor is a master of the Dark side of the Force. Inquisitors overwhelm their targets with Force lightning and lightsabers alike
Primary Attribute: Willpower. Willpower increases the damage and critical chances of the Inquisitor's Melee and Force powers. This remains so for the Assassin, while the Sorcerer's Willpower increases Force damage and healing powers instead
Advanced Classes (Available at level 10): Sith Sorcerer and Sith Assassin
Sith Sorcerer (Damage, Healing): Sorcerers unleash Force Lightning from a distance, disintegrating their targets with powers like Lightning Strike and Crushing Darkness. Sorcerers skilled in Corruption can twist dark side energies to unnaturally prolong their lives and the lives of their allies
Sith Assassin (Damage, Defense): Assassins are deceptive and manipulative Force wielders. Trained with stealth and double-bladed lightsabers, an Assassin can sneak in close to finish targets with acrobatic lightsaber moves and deadly lightning attacks. Assassins embracing Darkness can shroud themselves in dark side powers that obscure sight and leverage the defensive capabilities of a double-bladed lightsaber to harden their defenses."
―In-game Codex (Game Rules)[src]

The Sith Inquisitor is one of the two Sith Empire-aligned Force-user classes, standing opposite to the Sith Warrior.

The history of the Sith Empire is fraught with scheming politics and dark secrets—the lifeblood of the Sith Inquisitor. Treachery hides around every corner in the Empire’s dark corridors, and survival depends on an individual’s natural cunning and the will to manipulate and defeat their enemies and allies alike. The Inquisitor experiments with forbidden powers to not only survive in this cutthroat environment, but to excel and seize authority.

Regardless of potential, few acolytes succeed in facing the rigorous trials to become Sith Inquisitors. Only the most determined acolytes attain such an achievement, but these Sith are often the ones to watch. Due to their manipulative genius, Inquisitors are skilled at exploiting both their enemies and their allies to further their own personal agendas. Channeling this Force energy, Inquisitors are capable of draining the life from their enemies and using it to feed themselves and their allies.

Though their skills are varied and many, Sith Inquisitors are most feared for their ability to channel the energy of the Force, making them a spectacle to behold on the battlefield. Seething sparks of lightning explode from the Inquisitors’ fingertips and wrap their enemies in tendrils of pure Force energy. Because Inquisitors can twist the Force into lightning to stun, subdue, or destroy their foes, it has become their signature. Those who have experienced the sensation of the Inquisitor’s Force Lightning and survived forever recoil from the crackling sound of electricity.

Mastering the Dark side

To reach the highest echelons of power, the Inquisitor needs more than Force Lightning and a razor-sharp mind. The most formidable Inquisitors dare to explore unorthodox practices by investigating the enigmas of the past and by unlocking new powers for themselves. The Force is a source of unlimited potential—a wellspring Inquisitors tap and bend to their will. Such intensity allows Sith Inquisitors to become architects of the Empire’s future… or simply the architects of their own destruction.

The destruction Sith Inquisitors leave in their wake rarely allows for the survival of any recorded images. In the cases where the Inquisitors fury has been caught on holo, however, the daunting presence and the awe-inspiring power at the Inquisitors’ disposal present a striking picture. Whether the Inquisitor wields a Lightsaber with lightning-sharp attacks, or just Force Lightning itself, it’s always a dazzling display of deadly energy.

Asserting power and authority is one of the highest priorities for the Sith Inquisitors. Their choice of attire reflects this strategy, as they often prefer dark, high-contrast robes to express their sophisticated tastes and ambitions for political control. Nonetheless, despite regal appearances, great attention is given to ensure all their attire allows the flexibility for stunning acrobatics in Lightsaber combat. Of course, some Inquisitor outfits take expression to the highest extreme—designed to inspire sheer terror in those the Inquisitor comes into contact with.

Whether facing a traitorous fellow Sith or a crowd of Republic soldiers, the Inquisitor fights with unlimited fury to create a storm of destruction. Expertise in conducting Force energies further allows Inquisitors to draw upon the life essence of themselves and others. This energy can be channeled to bolster their powers, harm their foes, and even to reinvigorate their allies. An Inquisitor’s skills with a Lightsaber are equally impressive. Often wielding a double-bladed Lightsaber, Inquisitors use quick, guileful, and lethal maneuvers to strike their enemies down with astonishing speed.

Jolts of electrical energy vault from the Sith Inquisitor’s fingertips to weaken and often paralyze opponents. Many of the Inquisitor’s attacks make use of this skill. Charging their own bodies up with massive current, Sith Inquisitors are capable of releasing a wave of Force energy to blast everyone and everything in their vicinity. This explosive voltage not only drains the life of the Inquisitors’ enemies, but often knocks them to the ground as well.

Focusing Force energies to control the flow of air, Sith Inquisitors can incapacitate their foes by lifting them off the ground and encircling them in a small storm of energy. By the time the targets return to the fight, the Inquisitors are more than prepared to finish them off.

"Once a slave, <name> overcame the brutal trials of Korriban, the schemes of rival Sith Lords and deadly Republic opponents to become a force few in the galaxy dared to challenge. Now a member of the Dark Council, the Sith Empire's ruling body, <name> is master of a vast domain, with apprentices and soldiers ready to fight and die at their master's bidding. But with a new enemy threatening to destroy both Empire and Republic, new alliances must be struck, and <name> must personally intercede to ensure total victory...."
―In-game Codex (Persons of Note)[src]

The following species are available to play as a Sith Inquisitor. However, the Sith typically show contempt for species other than Sith Pureblood and Humans. Other species must prove their value amid intense persecution.

The Sith Inquisitor gains powers over the Force that other Sith do not. They are very gifted and tend to directly use the Dark Side of the Force as a weapon to a greater degree than the Warrior.

Sith assassins use a double-bladed lightsaber in the battlefield; this could indicate the amount of focus and concentration hidden within the Assassin. This isn't very unusual, as Sith assassins focus on deception to eliminate their foes; striking from the shadows. Sith assassins also specialize in defensive techniques through darkness that help them survive in battle. This may even enable them to be tanks in a party. Sith assassins can be the rogues of the game, using stealth to sneak in behind the enemy and taking them out with strong melee abilities. This is how their double bladed sabers come in handy.

Sorcerers are masters of the Dark side of the Force. They use Force lightning to inflict damage on their foes and healing abilities to help others and a single bladed lightsaber in battle. Most Sith sorcerers focus on being a Stand Back and Cast kind of player. They have a lot of abilities to control their foes in combat. They can slow down enemies or stop them all together. They can focus on Healing abilities to heal their allies, lightning to destroy their foes, or Madness to control the flow of battle.

The inquisitor utilizes a force system similar to mana. Force energy regenerates slowly in combat so if you're going into a fight it is wise to make sure you have a lot just for safety. Use Seethe to replenish your health and force before or after a fight. You start the game with a melee attack and a ranged spell. Usually best to start with the ranged spell on mobs because you might be able to get a second or third cast off before any damage is dealt to you.

There are a wide variety of garments available to the Sith Inquisitor. These clothes tend to be lightly armoured and more regal than that of the Sith Warrior. 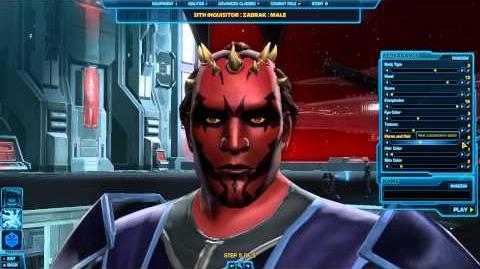 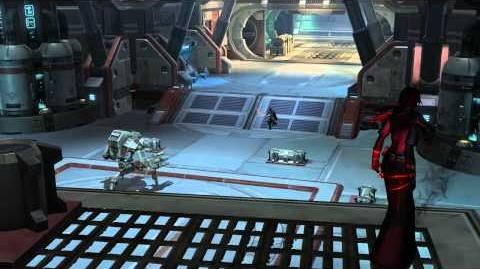 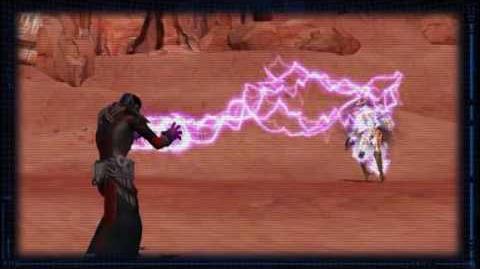 Retrieved from "https://swtor.fandom.com/wiki/Sith_Inquisitor_(playable_class)?oldid=110812"
Community content is available under CC-BY-SA unless otherwise noted.